If you had asked me before I was ten, I would have told you that I was an underprivileged child. Not because I was cold, or hungry, or unloved. I was none of those things. Ever. It was because of the A-Team.

I grew up in the golden years of TV shows designed to drive boys wild with excitement. There was MacGyver, there was Knight Rider, there was Airwolf. And there was the A-Team. Play the theme tune from any of those to an entire generation, now pushing forty and trying to work out whether the Jonas brothers are a band, a TV show, or a family owned furniture removal company, and they will stop what they are doing, just for a moment, while a slow, goofy grin toys with the corners of their mouths. They will zone out for a second while they try to dredge the names from the depths of their minds: Hannibal, Murdoch, Michael Knight, Stringfellow Hawk. And then they will carry on with their lives, saddened a little that their own kids will be doing this themselves in 30 years. For the rubbish on the Disney Channel.

Not me though. MY parents thought it would be good for us not to have a TV in the house. It was certainly character building. I went to an all-boys school, and had to learn to negotiate a complicated daily greeting ceremony which involved gangs of small boys in huge grey shorts shouting “Jeeeez! Did you guys check what BA did to Murdoch last night?” I learned very early on that the appropriate response was not “No, but I listened to a fantastic BBC radio play!” To this day, one of my most useful social skills is the knowledge that, if you have absolutely no understanding of what everyone else is talking about, smile and nod. It makes them very happy- not only do you agree with them, you’re not trying to muscle in on their valuable spot in the limelight either.

I remember feeling slightly hard-done-by at the time, but soon realised that my parents had more than made up for this inexplicable lapse. They had given us something else. They gave us the bush. By mistake.

For those of you not reading this in South Africa, or Australia, the bush is mostly just the wilder parts of the country. It’s where the lions are. So how did we get it by mistake? My father was part of a large law partnership. In those days, it was almost exclusively male. Large groups of men should not be left to their own devices. Every now and then, they would get a collective rush of blood to the head, and mass hysteria would set in. Once, a group of them bought a racehorse called Russian Thatch. At least that’s what I think it was called- we never saw it and it was never mentioned again. And once, when I was about ten, a bunch of them got together and bought a rondavel in a nature reserve. 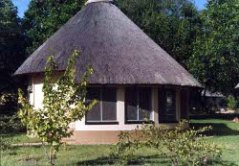 A rondavel. So now you know.

A rondavel is essentially a cross between one of those huts you see in pictures of Africa and a small house. There was, and still is, no electricity- everything ran on gas. There were no fences around it- animals like hyena and ratels (honey badgers) would come right up to us as we ate outside at night, and it was not unusual to be woken by roaring lions or elephants tearing down the tree right next to the house. Unlike the racehorse, it changed our lives.

My father eventually bought his own rondavel, which has slowly morphed into a rather nice thatched house. It formed the home base for an incomparable childhood. We would generally only go down over the school holidays, but most of my best memories live there. And what memories they were. While other kids our age were meeting up for movies at the mall, we were cowering under the seats of an open Landover as my father went far too close to grumpy elephants. We made friends at the communal pool next to what passed as a shop.

Africa, and some of its wildlife.

As we grew up, our friends at home were getting drunk in nightclubs and smoking in mall parking lots. We were driving around the bush at night unsupervised, spotlight in one hand, beer in the other, going far too close to grumpy elephants. With no electricity for TV or radios, and nowhere else to be, we learned to get on as a family in a way that few others do. And we loved it more than speech.

So what has this got to do with the book? My characters are about to leave their cosy little village and head out into the wild. To make it convincing, I have to try and invent an ecosystem. I have an unfair advantage though- thanks to my father, his partners, and superannuated peer pressure, I spent a large part of my childhood living right in the middle of one.

I’m going to start examining the separate parts of it more carefully, to see if that helps me create my own. I’ll try to put my musings on a separate page, so that anyone following this doesn’t have to wade through pages of honey badger anecdotes, but if you’re into that sort of thing, come along- frightened ten year olds and tipsy teenagers see things very differently to the discovery channel!

And what has any of this got to do with Oprah? It’s not just her, but she seems to have become the poster girl for a sort of semi-spiritual, Buddhist inspired worldview that takes much of its inspiration from wise sounding aphorisms. We’ve all heard them: “if you can see it you can be it”, “It’s not about the changes in your life, it’s about the lives you change”, “if you want to love others well, learn to love yourself first”, and the great big shiny lie “It’s about the journey, not the destination”. What have these people been smoking? I have three sisters. I love them all dearly. My father’s place in the bush, however, is five hours drive away from our home.

I can tell you with great authority that it is all about the destination. My father used to have a bright orange Mercedes sedan. This was before the whole idea of children’s car seats had reached our sunny shores, so the four of us would pile into the back (after a long and ugly battle about who got to sit next to the windows) and settle in for an epic ordeal. 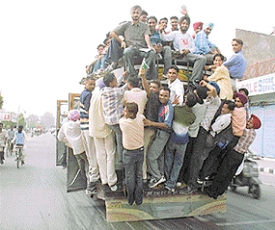 All packed up and ready to go!

We used to question my father’s sanity. He would load us all into the back, wind up all of the windows, turn off the aircon (bear in mind that 40 degrees Celsius is not an unusual temperature in the bush) and drive. As soon as we hit the open road, he would turn on the speed control, and keep it on, through heavy traffic, over winding mountain passes. It was taken as a personal affront if we needed a bathroom break.

It looks different at 120km per hour, four hours after you last saw the inside of a bathroom.

It was only after my mother broke out the “special” voice- a low, measured enunciation of his full name, that he would finally give in, sending four hunched-over, crab walking children scuttling towards the blessed relief of the one-stop restroom. He would claim that he was “testing the fuel economy of the car”. This would also, as an added bonus for my mother, involve driving until the fuel gauge was deep in the red. The towns out here are about 50 kilometres apart, so the consequences of getting it wrong would be dire. We thought he was completely mad.

Only now, with only two kids of my own, do I get it. A forty minute drive to visit my parents can be an ordeal. Five hours is hell on earth. And that’s with wonderful toys like iPads and seat-back DVD players. Driving four of us sharing a single bench seat, with no other entertainment but provoking each other, must have made Dante’s inferno seem like a tea party. And the aircon, the windows and the speed control? The first stop marks the end of sanity. Up until then, children are still excited about the coming holiday, quietly looking out the window or asking cute questions about the trip. One little bathroom break and it’s all over. The whining starts. The questions start, the fighting starts, the climbing out of chairs starts, the magical shrinking of the bladder takes place. My father is a wise and intelligent man.

And as for Oprah and her journey? Don’t fall for it just because it sounds like a naked, bearded old man living in a cave on a mountain might have said it. Ask someone genuinely wise. Ask a child. Get into a time machine and go and ask a small boy tramping across the hot, dry plains of Africa 50 000 years ago.

Ask a Native American girl, village packed onto horses and headed for the summer hunting grounds. Ask children on ships, crossing the trackless ocean, children in covered wagons, headed for a new life on the far side of a continent. Ask your own children as you drive out to your next holiday. Buddha-like, they will answer your question with a question, telling you everything you need to know. “Are we there yet?”