Today started out very well indeed. I had posted on my blog just before going to bed, and checked my stats first thing in the morning. I thought WordPress was broken, because I had over a hundred views. It turns out that I had been Freshly Pressed by the happiness engineers.

For those of you I have just lost, the happiness engineers are the shadowy, sinister organisation that controls the blogging world. Think of them as a slightly more cheerful version of the thought police from George Orwell’s 1984. If your blog is not quite positive enough, they might just pay you a little visit.Freshly Pressed is a page where they put up the very best blog posts in each category. The categories today included neuroscience, books, fatherhood and civil liberties. Mine was the very best in the shoplifting category. The other three shoplifting posts were just not up to scratch.

This made for a fantastic start to the day. Up until now, I have been overjoyed when 20 people looked at my post. Today, over a thousand people had a good laugh over the fact that I had been caught shoplifting. Inadvertently. I promise.

ARE YOU NOT ENTERTAINED?

It gets worse. The bus doesn’t go particularly close to my home either. I had to call my wife to come and fetch me. She looked a little strained when she arrived. My three-year-old daughter was so overjoyed by the idea of an evening drive that she climbed into the boot (trunk) and refused to get out. This distracted my wife from the fact that she and my son were boiling a putrid dassie (Google it) skull on the stove to try and get the carrion flies out of our house. Welcome to our happy home. The only home in the world in jeopardy of being burned down by the tortured spirit of the closest thing South Africa has to an Ewok.

We rushed home to find that the flies had all left because they couldn’t bear the smell. I’ve never been in a charnel house, and now I don’t need to. After the dizzy heights of international blogging fame of the morning, I found myself rather comprehensively brought back down to earth.

So now it’s time to deal with harsh realities. My car is broken. It’s parked in the middle of a parking lot which is going to be turned into a flea market on Sunday. This is all going to be a little expensive. But never fear. I have a solution. I threatened the other day to monetise this blog once I got more than twenty followers. Thanks to Freshly Pressed I have passed that mark. The only problem is that I’m not ready yet. I have a couple of ideas I’m toying with, and I would love to get some feedback. My first foray into the world of online surveys was a resounding failure but fortune favours the bloody minded, as the Romans used to say. It is the only way I can think of to gauge your opinion without having you openly abuse me.

The first idea is crowdfunding. I have been a little slow to catch up with this whole social media thing- I only joined Facebook this year, so I was overjoyed to read a blog the other day which introduced me to the concept of having strangers give you money for nothing. The blogger in question was berating the crowd in question for not giving him money to publish his book.

I see an immediate flaw in his plan. His followers suck. This is not just my opinion, he thought so too, and was telling them so at length. You guys, though, are a warm and special group of people who are no doubt more than happy to give me money to fix my car. Don’t be too concerned about giving too much- if there’s anything left over, I will use it to fund a blogging research trip to Paris in the springtime for me and my wife. That way the benefit goes straight back to you guys. Anything left over from that will be used to pay for the children’s education. This will also be done selflessly- society as a whole benefits when my children are kept occupied.

The next idea actually came to me from my wife, and has led to a degree of tension and professional jealousy in our otherwise happy home. Let me explain.

My wife has recently been retrenched (another reason for you to feel good about the money you’ll be giving us). Instead of moping around feeling sorry for herself, she is starting a business creating items that tie into her love for history and books. It turns out that she is very, very good at this. Gifted, some might say. She lacks, however, that last little spark of inspiration required to be called a genius.

This is where the jealousy comes in. You see, inspired by my wife, I decided to turn my hand to creating a couple of items myself. Genius. It was there all the time, lurking just below the surface. I am as surprised as you are. My wife, usually a kind hearted, supportive sort, fell prey to the green eyed monster. The better my efforts got, the more snide, condescending and critical she got. Genius is never an easy burden to bear, but even without my wife’s support, I have you guys to walk the path to glory with me.

I am sad to say that my first effort was not entirely original. I saw a dishcloth that said “This home runs on love”. Yawn. I’ve changed it up a little.

My wife liked it immediately. She said it was macabre! I haven’t had a chance to look that up in a dictionary yet, but I think it means awesome! She then burst my bubble by telling me that no-one but she and I would understand why there was a picture of a scorched dassie skull on the cloth. I had to explain to her that, even without the back-story, the skull would serve as a metaphor. “A metaphor for what?” she replied. I slowly and carefully explained that it didn’t need to be a metaphor for anything- it was just a picture of a metaphor on a cloth. It slowly dawned on me as we talked that she doesn’t really know how metaphors work. I’ll explain it to her when she’s in a more receptive mood. Anyhow, hers is not the only opinion in the world. What do you guys think?

Next, I decided to turn my hand to creating something specific to the blog. Something that would let my followers hold up their hands and say to the world “yes! I am a 23thorner”. I tried putting a single large Acacia thorn on a t-shirt, but it looked a little sparse. As an aside, if you are not into porn, never enter the words “large thorn” into Google image search. I still have a bit of a facial tic. To bring in a bit of volume and colour, but stick with the African theme, I decided to add in some Marula seeds. Nearly there. To really finish it off, I decided to throw in a slogan showing love and support for me in my time of need.

My wife said it was crass. Her first language is English, I promise, but sometimes she just throws words around without bothering to check their meaning. She even called it a double-entendre. Hah! Any fool can see that those are Marula seeds. Entendres are purple. So who’s right; me or the green eyed monster?

I have always been a bit of a peacemaker. Even when I am in the right, I am willing to make concessions just to keep everyone happy. Plus I don’t have a car at the moment, so my wife has me over a barrel. I decided to give the t-shirt idea another try. No catchphrases or anything (I think my way with words was the cause of my wife’s envy). When you have my natural flair for design, you can introduce layers of meaning to the simplest of images.

This was my idea; take a simple white t-shirt and print a couple of rose thorns on it. On one level, it is a frivolous bit of fun, a shirt that turns the wearer’s body into the stem of a rose, with their head being the flower. The perfect gift for that special ginger in your life. On another level, though, it is a freemason’s secret handshake of a shirt, a hidden message that only other followers of the blog can understand. “I’m a 23 thorner” it says. “I’m doing my bit to fix 23thorns’ car.” If you take it in the woman’s’ size, it also says “Let’s send his poor wife on that trip to Paris as well. It must be so hard living in his shadow.” 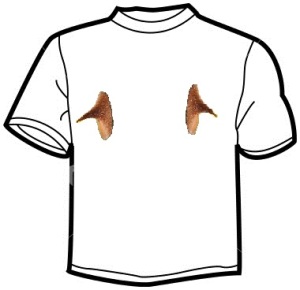 My wife obviously got that message loud and clear. I should never have shown it to her in the woman’s size. She hasn’t spoken to me for hours, and when I went to get dressed for bed I found that she had cut all my t-shirts off just below the chest. I’m going to have to lose a bit of weight before I rock those babies out in public! So what do you think of the shirt?

Sorry. My wife seems to have hacked into my blog and changed that last option! I think what’s really upsetting her is the fact that I am, in a way, muscling in on her territory. The t-shirts were her idea first, and it doesn’t help that mine are coming out so much better than hers. I think I can restore the peace (if not my t-shirts!) if I can come up with a product that doesn’t compete so directly with hers. I have always liked the idea of setting objects into Lucite, particularly objects from the bush. Items like porcupine quills, pieces of bone, dried flowers, and of course thorns have a stark, eternal beauty of their own. Setting them into Lucite reminds the viewer that what they are seeing is a form of found art. It is also a good way to sell things you find lying on the ground.

I toyed first with the idea of sticking a Lucite encased thorn on the outside of a coffee mug. It just didn’t work. The bulk of the thorn broke up the smooth outline of the mug, and it was just ugly. All was not lost, though. I had been keeping some spare thorns inside the mug while I messed around with the outside. I glanced in to fish one out and it came to me. All I needed to do was toss a few thorns into the bottom of a mug, pour in a little Lucite and BOOM! Art! I have to be careful though. In these litigious times, one cannot take any chances. Even though the thorn should be rendered harmless by the Lucite, I decided to include a warning on the outside of the mug. The last thing I need right now is a lawsuit.

Judging from my wife’s reaction, this is my best work yet. I have a large bruise on my forehead, and my prototype is broken, but I think that we have found our signature piece! I need one last piece of feedback from you guys. Where should I sleep?

25 thoughts on “Crashing back down to Earth.”