My wife, bless her, is making great strides in the business she is starting. She’s moved on from the t-shirt idea, and grown obsessed with chemicals. We are currently bottling and labelling thousands of bottles of room freshener at the coffee table in front of the TV. There’s a barrel full of bath salts in the corner. My house smells like a brothel. There’s even an undercurrent of disinfectant from the hand sanitisers we did last week, for added authenticity.

For those of you who have not been following this blog for a while, my wife fell victim to the wave of electronic readers crippling the book industry, and was retrenched by the publisher she worked for. Instead of trying to find another job in a shrinking industry, she decided to try her hand at producing a line of book related products. Turns out that she’s actually very good at it. Since our whole family has a vested interest in her success, I decided to try and help.Turns out I’m a frikkin’ genius at it.

This of course led to marital strife. When I presented my last line of designs, she didn’t take it very well. The very good are always resentful of the great. Part of any good marriage is the ability to work with your partners frailties. I spent a good few nights wondering about how to move forward (I was sleeping in the car, so I didn’t have TV as a distraction), and I think I know what the problem was. I sprung my ideas on her without warning, and I think she was intimidated by their brilliance. Now that she’s had a few weeks to get used to the idea, I think she’s ready for my help. I think the horse tranquilisers I’ve been adding to her coffee may help as well.

I’ve built up a new portfolio, and I’m ready to present it to her tonight. I’ve decided that the best thing to do will be to make some minor adjustments to her existing products. That way, she can fool herself into thinking that she is the true creative force, and we already have all of the required equipment. In case she needs a last little push, I’m going to ask you guys to fill out a couple of surveys saying that my designs are better. Thanks.

My first move is a master stroke. Instead of “adjusting” one of her existing products, I’m going to suggest a parallel product. She’s produced a hand sanitiser. It’s called “Lady Macbeth’s Out, Damned Spot Hand Sanitiser” (I think it’s a line from a Kenneth Branagh movie. Clever.) Here it is. 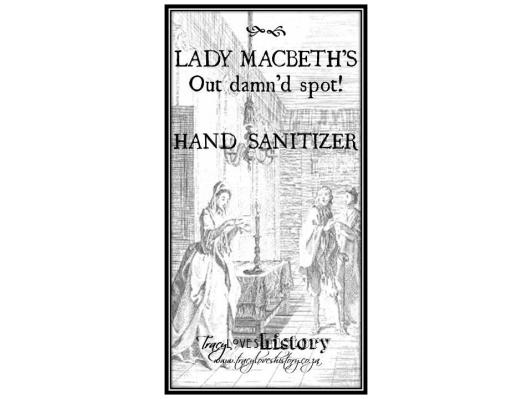 I’m sure you spotted the problem immediately. Not? Picture this: Two women are making sandwiches together in the kitchen when one of them spills some mayonnaise on her hand.

She falls back into a chair and pushes the back of her clean hand to her brow.

She pulls a small bottle out of her handbag and passes it over.

Cindy:   “It’s “Lady Macbeth’s Out Damned Spot Hand Sanitiser”. One spray will wash all your troubles away.”

Suzie:    “Aww. I just love Kenneth Branagh. Where did you get it from- I have to get my hands on some”

That works just fine, doesn’t it? But now picture this: Two burly men appear from under the hood of a pickup truck, covered in dirty black engine grease.

Butch:  “Oh my aching nerves! My hands are all dirty. Whatever am I to do?”

He leans back onto a workbench and holds out his hands.

He pulls a small bottle out of his man bag and passes it over.

Bubba: “It’s “Lady Macbeth’s Out Damned Spot Hand Sanitiser”. One spray will wash all your troubles away.”

Butch:   “Aww. I just love Kenneth Branagh. Where did you get it from- I just have to get my hands on some!”

Bubba:  “Did you catch the game on Saturday?”

The problem is clear. “Lady Macbeth’s Out Damned Spot Hand Sanitiser” is for girls. That cuts out half of our market in one fell swoop. Don’t worry. I’ve come up with a parallel design just as appealing to men. Behold!

We’re off to a good start. Now let’s tackle something a little more tricky. Room sprays. The idea here is a great one. Take a famous author or literary character and try to literally distill their essence into a scent that you can spray in your bathroom after some “alone time”. I’m sure it was actually my idea- my wife and I talk a lot and that’s great. Except for the fact that I caught her taking notes the other day.

As always, my wife seemed to battle a little with the execution. Let’s start with the Ernest Hemingway room spray. Here’s my wife’s design. 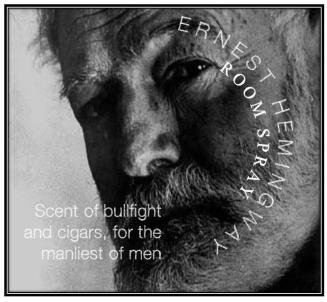 Her design is very, very good. So how do I make it great? Let’s take a look at the great man himself. What was he most famous for? Sure we all know he was a man’s man, into bullfighting and hunting and cigars and whisky and fishing, but that’s not what made him a great writer. Brevity is what made him a great writer. Short, sharp, unembellished sentences, cutting straight to the heart of the matter. So let’s honour that in our design. Hemingway loved bullfighting. He saw it as a dance between man and beast, a stark ballet of mortality. Two souls enter the bullring, one of them destined to die. Let’s honour that by conjuring up the dust of the arena. 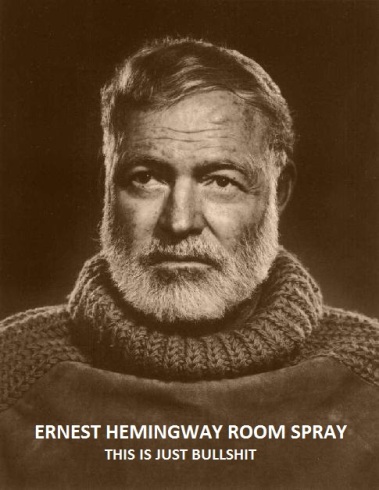 Another triumph! I think I’m hitting my stride. Let’s move on to The Great Gatsby.  Here’s my wife’s design. 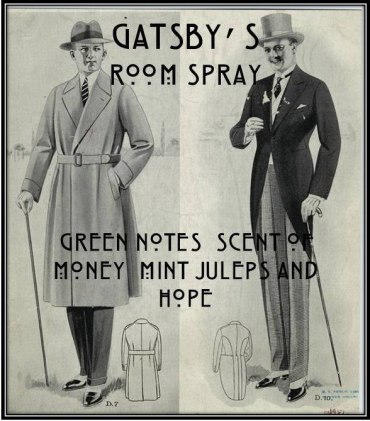 Nice. I must confess that the last time I read the book was several decades ago, but I’ve got a pretty good memory. I don’t think my wife has read it for several decades either. And, looking at this, I’m not so sure about her memory. Surely a great writer like Gerald Scott Fitzpatrick wouldn’t write a whole book about cocktails and money. She may be right about the hope part though. I seem to remember the book being about eggs. Not just as a tasty snack, though. As a metaphor. A metaphor for hope. Hope of a brand new chicken. And there’s your design. Bam! 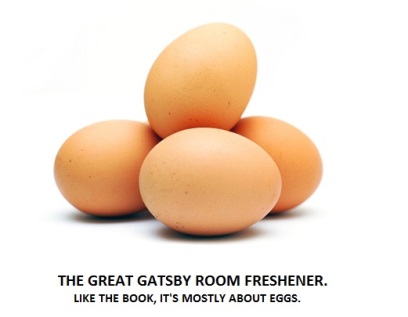 Nailed it! Let’s move on. Here’s the little woman’s next design: 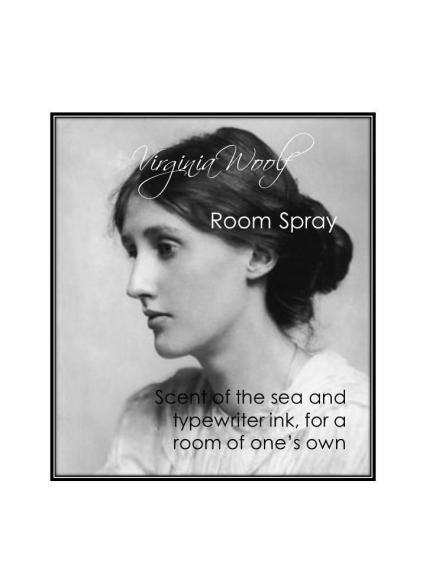 I see an immediate problem. Virginia Woolf is a little obscure. I feel that we need a design that can still appeal to those who aren’t familiar with her. For those of you who fall into that group, Virginia Woolf was famous for two things. Her writing and her career as a long distance swimmer. She loved the sea. The only book of hers I’ve read was about lighthouses. Her life was cut tragically short when she drowned during the first attempted swim of the English Channel by a woman.

So how do I cover all of these things without alienating the illiterati? Tricky, but I’ve managed to pull it off. First of all, let’s take her name out of it. Her face is instantly recognisable to those who love her. It’s also very long. By taking out her name, I honour her and her love of the sea, but also deliver a product with a witty little pun for those who have not yet discovered her: 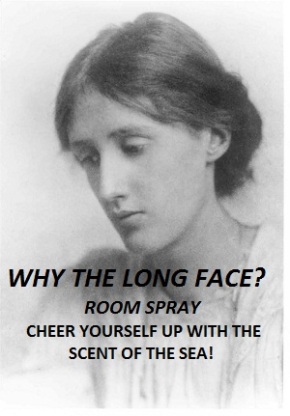 Rather cleverly, my wife hasn’t limited herself to obscure dead authors. As a book lover, she has had the courage to take on the greatest book of all time; 50 Shades of Grey (the sales figures speak for themselves). Here is her offering: 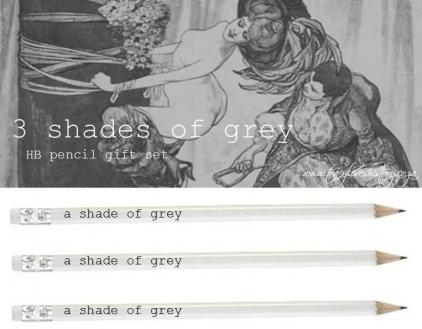 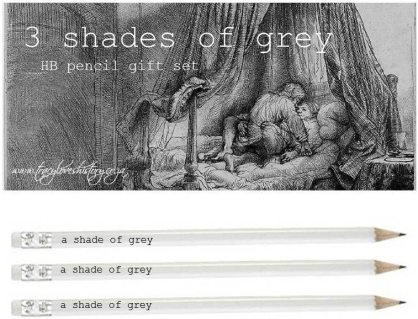 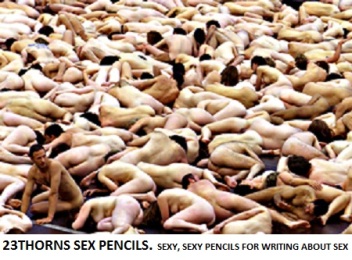 Right. Let’s move on and never speak of those dirty, dirty pencils again. Let’s talk about bags instead. Shopping bags. This is where it all started, and I’m afraid it shows. This was supposed to be about books. My wife can be very excitable, and when an idea is fresh in her mind she tends to rush in. I think with the bags, she decided to find some vintage illustrations and tie them up with books.

That was the idea. Fell down a bit on the execution though. Instead of telling you, let me show you. Here’s the first: 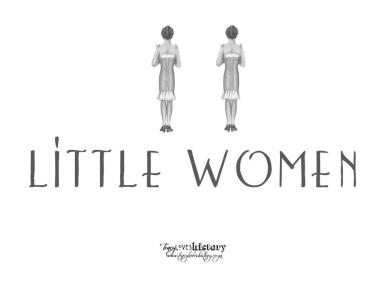 You can see what’s happened. She found a pretty picture of some little women. So far, so good. And the book part? Forgedaboudit! She’s just labelled the picture with the first thing that came to mind. Guess what that was? I’ve tried to update the language a little, but I think you’ll agree that, while it may be an improvement, this is a rare fail on my part: 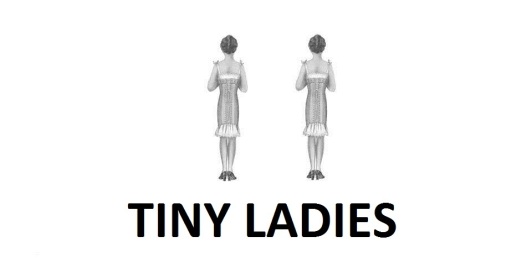 You must be hoping that things got better. They didn’t. They got worse. My wife found another pretty picture. Of a ship this time. Bit of a problem though. She somehow managed to save the picture upside down. Did she read “The Dummies Guide to Photoshop” to learn how to fix it? She did not! She just gave it some obscure label to make it look like it was upside down on purpose: 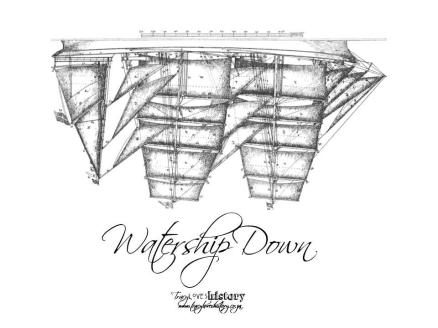 Again, I’ve tried to salvage the situation. I flipped the picture (not rocket science!) so I could take out the “down” part of the label. I took the “water” part out as well (I don’t think anyone thinks it’s an airship, dear), but it’s still just a label. Not my best: 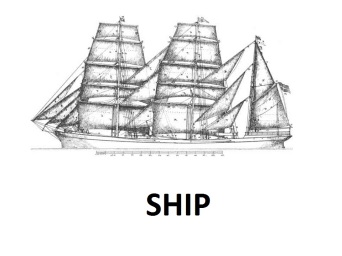 The final bag was a bit of an improvement. She’s Photoshopped a picture of Tolstoy. I think what she was trying to do was to show that the great man retained a youthful exuberance, a boyish blitheness of spirit, despite his advancing years. Epic fail. This time though, the blame lies with me. You see, my wife is a bit spoiled. I work out. I have a luxuriant mat of manly chest hair. She’s clearly just browsed around until she found what she mistook for a boy’s body, and slapped it onto the great man’s head. 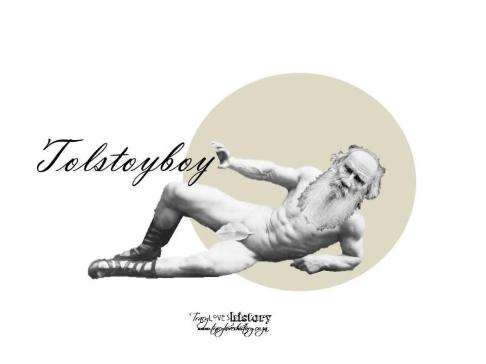 I’ve even gone one better. I’ve done a series.

And why stop there? Here’s one for the ladies.

And that’s not all! Tom up there sparked a bit of an idea. Why not throw in a bit of a pun, just to bring a smile to peoples’ faces, and really sell the idea?

So there you have it. We make a great team. My wife will keep coming up with good ideas, and I will keep making them great. We might need to work on our timing though. Her designs are already available in some of the local bookshops, and soon you’ll be able, to get them yourself on her website. If you aren’t in South Africa, you’ll be able to get a really great deal. The exchange rate is really favourable, and I can’t see the postage on one of the smaller items coming in at anything more than $500.00. You may as well give them a try while you wait for the good stuff.

My designs should be available quite soon. I’m sure my wife will be arranging to have them produced in bulk this very evening. Just as soon as she comes out of the bathroom. She locked herself in there after I showed her my designs. It’s been a couple of hours and I’m starting to get a bit concerned. Maybe she’s testing out the room sprays.

34 thoughts on “The Family Business”