My wife claims to remember being three. So did my father. I can’t even remember much about being twenty. But there is a vast difference between remembering a place or an incident, and remembering how something feels.

Being three must feel a bit strange. Everything is big. Everything is new. And a whole lot of things are apparently rather scary. My daughter is three. Moths are unnerving. Bees are terrifying. Speaking in public is apparently deeply unsettling, which is a little odd since skipping through a mall dressed as a fairy with no shoes and a kilogram of self-applied make-up on is not.

And the Easter bunny is a sneaky, mean spirited and worrying lurker. A garden invader. A child stalker. As Easter approached this year, we began to realise that maybe, just maybe, we had talked the whole thing up a little too much. Three-year olds are weird. For some reason, when told that an enormous anthropomorphic rabbit knew where she lived, and would be nipping around outside her window while she slept, my daughter was not excited. She went all quiet. She toyed with her food at supper. She glanced nervously at the window.

And come sleep time, she made it clear that sleep was not on the cards. She had a few questions. Just a few little things that needed clearing up. Who was this bunny? How did he propose to get into our garden? Was this not precisely the sort of stranger that one shouldn’t take candy from? Did he have a license, or at least some sort of letter of introduction? 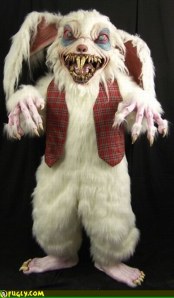 Easter is a special time for little children.

After forty minutes of spirited discussion, my son came to the rescue. He’s eight. Cynical. Worldly wise. He knows the game. And he knows the rewards. “Go to sleep”, he shouted “or we don’t get any chocolate!” And she did. And they did. 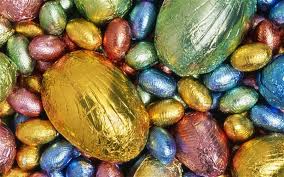 Feel free to pop round to the 23 thorns compound any time. Please just be aware that a nominal entrance fee will be charged.

Five o’clock the next morning found me blundering around in the dark, greasing the wheels of international commerce by hiding a small fortune’s worth of chocolate eggs in a bush. I’m not good at five o’clock. I can’t think on my feet until at least ten. So when, as I staggered, bleary eyed and muddy, back toward the house for some coffee, I bumped into an equally bleary eyed three-year-old, I blew it.

“What,” she said, looking up at me suspiciously, “are you doing outside in the dark, Daddy?”

“Well,” I replied, crouching down in front of her, “I was lying asleep in bed when I heard a noise outside. I grabbed my torch and went out to have a look. There was nothing there. But as I turned around to come back inside, I heard something. I spun around and shone my torch, but all I saw was a bush moving, and a flash of white disappearing over the wall. What,” I asked, “Do you think it was?”

The bleary little eyes widened. There was a fearful glance at the bush in question. And then all I saw was a flash of white disappearing into the warmth of the house. Oops!

But all, at least in the short term, is well that ends well. There was chocolate. All was forgiven. Apparently it’s OK for enormous, sinister white lagomorphs to loiter about the property at night as long as they pay their dues. The Easter bunny was all right. For a while. But then he did something unforgivable. He bought my daughter’s dummies.

Those of you who have raised children may understand what a heinous thing this was to do. A dummy, for those of you feeling slightly bemused by the turn this post has taken, is a pacifier. Like some adults, some children can grow unnaturally attached to things. Nasty things. Bedraggled old blankets, or saliva soaked teddy-bears or rubber fatigued dummies. If you don’t have any of your own, and are the sort of maladjusted person who likes other peoples’ children, you are probably smiling to yourself and mumbling “cute”. You are wrong.

There is nothing cute about children and their “favourite” things. I put favourite in inverted commas, because it’s not the right word. That stuff is like heroin. It’s like Gollum’s precious. And you know what Gollum is like if you take his precious away. Try forgetting your child’s precious when you go away on holiday, and Gollum will suddenly seem rather likeable. An affable sort of chap. Pleasant company.

Hello, my good man! Care to join me for a cup of tea?

My daughter’s precious was her dummy. Or rather her collection of dummies. There was “golden”; a rather anachronistic looking thing made of soft rubber that was the main “sucking” dummy. Then there were “Big Blue” and “Big White”; two far more modern looking numbers with hard plastic parts and swivelling handles. One of them even glowed in the dark. These were not the “sucking” dummies of choice. 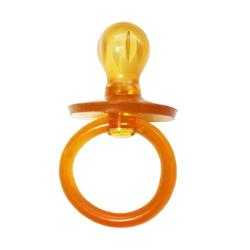 Golden. The Bringer of Light. The Restorer of Peace. He Who Must Not Be Misplaced.

The primary purpose of Big Blue and Big White was being clutched in the hands at night. They also performed a useful secondary role in that, by simply throwing them behind heavy pieces of furniture and then squawking, they could be used to make grownups look sad.

Then there was “Dirty Dummy”. Dirty Dummy was Golden’s older brother. It was not dirty. It was filthy. The rubber has started to rot away, and large parts of it seemed to have succumbed to some sort of fungal infestation. Dirty Dummy was not for sucking. It wasn’t even for clutching. But it couldn’t be thrown away. It just had to be around. I think she was using it to ward off evil spirits. 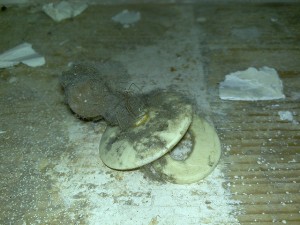 Begone, foul demon! You have no power here!

A few days after Easter, the woman who comes in to clean the house did something terrible. She hid the dummies. All of them. Not just from my daughter, but from us as well. It took us a while to realise this. The first sign of impending danger came when, just before bed-time, a tear stained, chocolate stained little face appeared round the corner.

We knew what this meant. No rest for anyone ‘til she found her precious. We sprang into action and stripped the house. Golden was nowhere to be found. Oh dear. We straightened our backs, squared our shoulders, and went through to enter into negotiations.

“Golden is missing. You’ll have to use Big Blue.”  We closed our eyes, clenched our teeth, and waited for the explosion. There wasn’t one.

She disappeared round the corner. And reappeared two minutes later.

Bugger. We stripped the house again. No luck. Oh well. Off to the all-night pharmacy to buy an emergency Golden replacement. But then my wife had a brainwave.

“Do you know what I think has happened?”

“What?” came the tearful reply.

“I think the Eater Bunny has taken your dummies to give them to some little babies, because he knows you’re not a baby anymore.”

“No, he didn’t steal them. I’m sure he will leave some money for them under your pillow. He just wants to share them with those poor little babies who don’t have any dummies of their own.”

A note to all new parents. Throw away all this books you bought. This is all you need.

And it worked! After a brief, forty-five minute discussion about what she was going to be buying with her bunny-money, my daughter rolled over and went to sleep. No problem. My wife is a parenting genius.

The next day, after frantically scrabbling under her pillow for the R10 the Easter Bunny had left, we set off to the shops to use it to magically buy R100 worth of tiny plastic Barbie shoes. And then it all fell apart.

Barbie shoes clutched firmly in her sweaty little hands, she looked up at us.

“The Easter Bunny”, she announced, “can bring back my dummies now.”

“He can’t, mouse; he’s already given them to the babies.”

Bed time that night wasn’t a time for stories. It was a harrowing hour-long negotiation. Promises were made. And threats. From both sides.

Now our lives have descended into evening time anarchy. During the day, my daughter is sweetness and light. With the approach of bed-time, she turns into the antichrist. Somehow, this has become my fault. I cannot feed her, bath her, dress her or even go near her. I get screamed at. Doors are slammed in my face. Heavy toys are thrown at me. My wife can only get her to sleep by telling her an hours-worth of stories about when she was a baby before singing her the national anthem (don’t ask!)

Like all things parenting, this too shall pass. But I fear for the Easter Bunny next year. He had better be super quiet when he sneaks into our garden, because someone is going to be waiting for him. In a tiny Elmer Fudd hat. With a cartoon shotgun gripped firmly in her little hand. 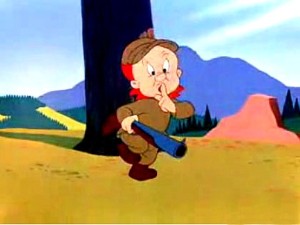 And if he gets past her, he’s going to have me to deal with! 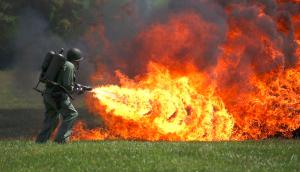 72 thoughts on “The Easter Bunny has ruined my life.”