I haven’t posted anything for a while. I’m not sorry. You see, I have been much too busy. I went for a swim. Here. 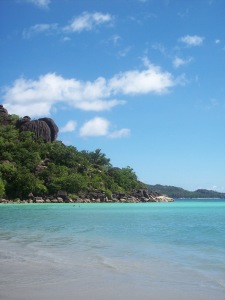 My mother took the whole family (Nine adults and nine children) for a holiday in the Seychelles. It was very hard work indeed. Every morning, I would have to wake up and choose a special holiday outfit. I simplified this difficult process by wearing the same swimming costume for over a week.

Then there was all the walking. The sea was more than 20 metres from our door, so going for an early morning swim was a gruelling undertaking. The hotel restaurant was right on the beach, which was nice, but there were steps. Seven of them. It was exhausting. Then there was the punishing hike up to the hotel pool, at least thirty metres in the driving tropical heat. 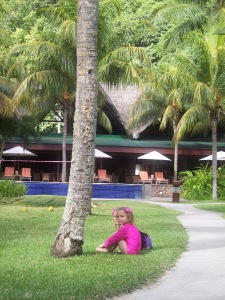 The long, lonely walk up to the pool.

It wasn’t just the walking. Floating in the warm, clear water while trying to carry an ice-cold and surprisingly heavy beer was an ordeal I wouldn’t wish on my worst enemy. And spending eight hours a day in the water did terrible things to my skin. It made it wet.

As you can no doubt tell, I somehow managed to survive the whole ordeal. I’m not ready to write about it yet; the horror is still too fresh in my mind. Instead, I’m here to announce that I have decided to put anyone naïve enough to follow this blog through an ordeal of their own.

Just before I left, I made the mistake of trying to see how my blog was doing. I thought I was doing pretty well. I get over a hundred hits a day, and have even managed to get a few followers. It turns out, however, that my blog sucks. A brief search of the oracle of our time, Google, reveals that a good blog gets 60 000 hits a month. Oh.

I have reached precisely half that number in over ten months. It would seem I still have a way to go. And go I will. I have, in the past, tried a couple of things that were outside my comfort zone in order to get the most out of the whole blogging experience. I did a photo post. I wrote a poem. I even wrote about pants. But now I’m going to take things to the next level. I’m going to follow some advice. I’m going to try to do things properly. And then I’m going to stop. Because I don’t like following advice. Or doing things properly.

There seem to be thousands of people out there who blog about how to blog properly. And they all say pretty much the same sorts of things. Posts should be short; five to seven hundred words. You should post often; preferably once a day. You should find a niche and stick to it. You should engage with other bloggers. You should do guest posts on other blogs. Right.

As for engaging with other bloggers, I’ll try. I’m not the world’s best engager. If you check up on your blog over the next few months and find something mawkish like “Hello. I’m 23thorns. Please will you be my friend? I’ll let you borrow my shoes and send you a picture of my dog if you say yes.” I apologise in advance. I’m just doing what the experts have suggested.

I don’t really know what a guest post is. I know it’s when one person writes a post for someone else’s blog. I just don’t know why. Blogging is, for the most part, a hobby. I don’t want to collect stamps for anyone else, and I don’t want anyone else to go on a hike for me. But I’m game for anything. Except finding a niche.

And the point of all this? 60 000 is a good looking number. Its’ all round and curvy and sexy. I want it. I want to get sixty thousand views in a hundred days. Just like I wanted a guitar when I was younger. I’m going to be cheesy about it, too. I’ll set up a page with one of those huge thermometers they use on phone-in fundraisers, so that you can gloat about how far off the mark I am. What fun we’ll have!

My blog. As much fun as a televised fundraiser.

What I don’t want is to alienate anyone who has been kind enough to follow me so far. All you maverick nonconformists who don’t understand that you’re not supposed to like 3 000 word posts. So I’m going to keep on doing those too. And I’m going to give you a way of avoiding my little folly. If you are following my blog already, and see a post with a number in the title, avoid it like the plague. It’s just me prostituting myself for anonymous fame.

And if and when I get there? I bought that guitar. And I never learned to play it. 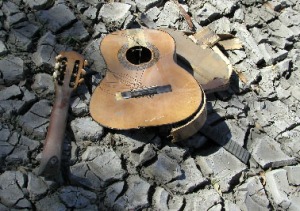 My blog in a hundred day’s time.

96 thoughts on “A blogging challenge.”