I’m writing a blog a day for 100 days. It’s day 1. It’s not going well. I can’t  focus. Every time I start to type, my concentration is broken. It’s not that I’m not committed to the task, nor am I struggling with writer’s block. It’s just that every time I get started, a witch comes into my room and starts fiddling around with my underpants. It’s very distracting.

From an African perspective, she is not a witch. In fact it’s mortally offensive to call her one. She’s a Sangoma. A traditional healer. She’s one of her people’s primary defences against witches. But if the good people of the Spanish Inquisition, or the gentle puritans of 1690’s Salem sat down for a chat with her, the conversation would end with her being burned alive. She is a modern day shaman. A communicator with spirits. A channel to the ancestors. And she does our ironing on Mondays. 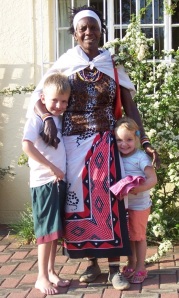 Her name is Happiness. Some years ago she wandered down into South Africa, fleeing the economic meltdown of her homeland, Zimbabwe, and seeking a better life. She works in our house a couple of times a week, cleaning and ironing. She wasn’t always a Sangoma. That only happened a couple of years ago. She got sick. And didn’t get better. She went off to see a traditional healer, and he told her that she wasn’t sick. She was being called by the ancestors to become a healer.

Her training was brutal. She went through a Highveld winter, with below-freezing temperatures, sleeping on a concrete floor in a tin shack. She was allowed no warm water. She looked permanently haggard. But she made it. Now she arrives at our house looking like she should be dancing around a fire shrouded in smoke, eyes rolled back and body quivering as the spirits take her. She pops on a housecoat, does a little sweeping, and then dons her regalia again before going home.

It’s easy to roll our own eyes at this sort of thing. But there is something else at work here. There are 0ver 50 million people in South Africa. There are 25 thousand doctors and over 200 000 traditional healers. For an awful lot of people, Happiness the Sangoma is as good as it gets. And what she does might not heal tuberculosis or HIV, but it can certainly come to the aid of a troubled spirit. How many people out there have an appointment with a therapist this week?

And if you’re thinking that these people are simple or naïve, remember that I used to be a bookseller. I know how many people bought “The Secret”. We don’t get to laugh at people whose dead grannies have told them to slaughter a goat while we beat a path to riches by just really believing that the universe wants us to have a Maserati.

Happiness is a Sangoma. That’s someone who communicates with the ancestors. A person who’s feeling ill, or who has an important decision to make, or wants to get rich, will go and consult her. And she will consult the ancestors, by throwing the bones (or some other such ritual). And pass on what they say to her clients. Just like the oracle at Delphi.

There is another type of traditional healer out there. They are called Inyangas. They are the purveyors of muti. Traditional medicine. And they are not to be trifled with. They sell some dodgy things, like Python fat or vultures wings. But for the most part, they sell herbs. Not parsley and garlic. African herbs. And those herbs actually work, to the extent that they are now being scrutinised by scientists in search of cures for things like cancer and HIV.

These guys have to be very well trained indeed. At the wrong dosage, the stuff they’re selling can kill you, or leave you blind. But it’s worth the risk. Here’s a little menu that was popped through my window the other day.

Can your doctor do even a quarter of this stuff?

Want to win contract after contracts? Want to enlarge/reduce your bums? Want a bigger penis, permanently, or just to make more rounds during sex? Come and see Professor Kimbo. Bring some money though. His offices are in Sandton. So are Microsoft’s.  It will be worth it. You’ll “BE A LION IN BED!”