We can all heave a sigh of relief. I don’t know about you, but I just haven’t been sleeping well. I’ve been picking at my food. Losing interest in my appearance. Moping. But that’s all over now. Justin Bieber’s monkey has found a new home. Yup. Poor little Mally is gonna be OK. Group hug, guys.

A dirty, flea-ridden little beast. And a Capuchin Monkey.

I was going to write a post about Bieber a few weeks ago. You see, he came out here for a tour. With his mom. And he ran amok! He scratched a golf-cart, and asked for some water pistols to be sent to his room. Pop has found its new wild man! And then, because this is South Africa, thieves tunnelled through the wall of his concert venue after a show and stole all the takings.

I didn’t write about him though. I told myself that I didn’t care about him, and neither do you. But that’s a lie. I do. And so do you. You cannot deny it. All you can do is shift the blame. It’s all a guy called Dunbar’s fault.

Robin Dunbar is a British anthropologist who came up with “Dunbar’s number”. And what is Dunbar’s number? It is, you will be pleased to know, 150. Brilliant man, that Dunbar. Should I ever come up with a number, it will probably be much lower than that. 23. It will be 23. I’ve already got a number, and I’m too lazy to go off and get another one.

150 is the number of people that Robin Dunbar calculated we could deal with as living, breathing, feeling people. Others have put the number higher, up to about 230. But the theory itself holds. There’s a limit to the number of people we can see as people. Remember the building that collapsed in Bangladesh a few weeks ago. Over a thousand people died. And if anyone out there tries to tell me they lost any sleep over it, I will call them a liar. Not because I think we are unfeeling, but because we can’t feel for a thousand people. It’s too many.

There are no people here. Just a crowd.

And here’s the weird thing. If we focussed on just one of those people, we would have lost sleep. If we learned the name of a young Bangladeshi woman who died in the tragedy; if we found out the names of her children, and what her favourite things were, and what her hopes for the future were, then we would have cared. Because one fits within our Dunbar number. We can deal with one. We can sympathise with her, weep for her unfulfilled dreams, worry about her children. We can’t do that for a thousand people though. We’re just not wired that way.

We’re wired to be monkeys. Primates. Primates tend to be social animals. And generally speaking, the smarter the primate, the bigger the social group. But the size of the group is limited by that Dunbar number. Fewer than that, and you can know everyone’s name. You can know who their friends are, who their children are, and who their spouses are. You know who fits into which clique, who is enemies with whom, who is sleeping with whose spouse. 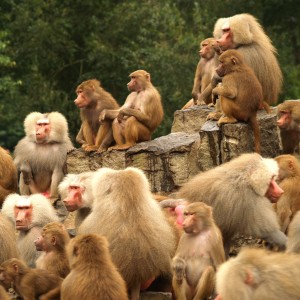 The one on the top right is the only one in the troop that doesn’t know that those aren’t his own children.

And a terrible thing has happened to us. For almost the whole of our existence as a species, we have lived in groups of 150 or so. We lived in small nomadic bands or tiny villages. We knew our friends. We knew our enemies. We knew our leaders, and our followers. And then, a few thousand years ago, that all went to hell. Even if you live in a tiny little village today, it has vastly more than 150 people in it. We live in a world we are not designed to cope with.

So what has any of this got to do with Justin Bieber? Well, a very strange thing has happened. The more people we find around us, the harder it is to fill up that Dunbar number. It’s easier to do so if you are a member of a church, or live in a small town. But how many of us can name a hundred and fifty people and tell us a little bit about them. I mean real stuff, like who their kids are, and how happy they are in their relationships, and what jobs they do?

All of us. We are, if nothing else, a resourceful species. We found ourselves in a world where we didn’t know our neighbour’s neighbours. We didn’t know what the man who baked our bread was called, or if our child’s teacher was happily married. Strangers made our clothes and sat on our town councils. Our primate brains were withering away from loneliness and isolation in the middle of a crowded world. And we fixed it. With Justin Bieber. You need him. He’s part of your group.

He’s our friend. Now who’s going to have a word with him about those pants?

You may be howling in outrage. But here’s the thing. I never said you liked him. But you know who he is. You know what he does for a living. You have some sort of idea of what sort of person he is. Even if you have no professed interest in him at all, you may know that he has an on-again, off-again relationship with Selena Gomez. And that Germany took his monkey away. Do you know anything like that level of detail about the people who live six houses down from you?

There might be one or two of you out there professing complete ignorance of Justin Bieber. I’m not letting you off the hook. It might not be Bieber. It might be Lady Di. Or Obama. Or Tom Cruise. Tiger Woods. Lance Armstrong. David Cameron. Mitt Romney. And we really know these people. Better than our local butcher. Or the guy who took out our wisdom teeth.

In fact, if you sit us down and we make an honest effort, most of us could write down about 150 names. And describe their jobs. And the state of their relationships. And a little about their kids. And what sort of people they were. They just wouldn’t be our neighbours anymore. They would be singers, and actors, and sportsmen, and politicians. We might never meet them, or even be on the same continent as them, but there they are, warmly occupying the outer edges of our social groups.

There are even people out there whose only role is to fill up those Dunbar numbers. How else to we explain Paris Hilton and Kim Kardashian. Do they even have jobs?

What does she do? Honestly? Social worker? Women’s rights advocate? Fabric stress-tester?

And there’s something even weirder about this. We don’t do it consciously. We are wired to do it. It just happens. I don’t like Justin Bieber. I cannot identify a single song of his. I have never sought out a single item of information about him. But I happen to know an awful lot about him. More than I do about the woman who teaches my son. It just creeps in there. It’s on the news as I drive to work. It’s on the cover of a magazine as I wait to buy my groceries. It’s on the TV as I wait for Game of Thrones to come on. And it sticks.

And that’s all we have time for today. I would go on, but I’m a little busy. I need to find out how Kstew and Rpatz are doing. Such a shame about their breakup. And any word on how it’s going with Ange’s recovery? Brad’s been such a star, hasn’t he? So supportive. Not like that vile Chris Brown. Thank God Riri has broken free of him. Even though her behaviour does seem a little erratic these days.

I’m lying. I’m not going to find out about any of those things. I’m going to be too busy finding out who Amanda Bynes is. I’m most impressed. In Paris Hilton and Kim Kardashian, we had people who were famous for being famous. But now we have something new. Amanda Bynes seems to have pulled off the rather clever trick of having a full-blown, fame-induced celebrity meltdown without having gone to the trouble of being famous. She’s famous for not being famous. If Dunbar was starting a faith, he would have found his Goddess.

Like a latter-day Siren, her beauty holds the world in thrall.