It’s been a busy week. The kids are home for the holidays, and I have grown temporarily obsessed with filling my driveway with sawdust and broken bits of wood. This hasn’t left much time for posting. I’ve still been getting them out, albeit later than usual, but it has given me pause for thought.

The main reason I set out to do this was to practice writing. I wanted to see if I could write every day rather than just when I felt like it. I also just wanted my writing to become more fluid.

But here’s the thing; I’ve never been much of a self-editor. I would even hand in exam papers unchecked, even if I had the time. I do, however, think that one should at least read over what one has written before sending it out. If someone is kind enough to read what you have written, it’s disrespectful to send out something half-baked. 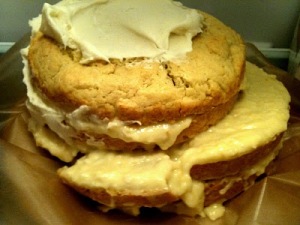 Care for a slice of cake?

The less time I have, the less carefully I edit myself. I don’t think I’m sending out any glaring errors, but I’m starting to question my style. First of all, there’s “and” and “but”, my two new bugbears. I know you’re not supposed to start sentences with them. But I do. And it’s starting to annoy me.

Then there’s that whole thing with sentences. There are rules about how sentences are supposed to be put together. I break those. All the time. My spellcheck doesn’t like it.

And you won’t like my spellcheck when it gets angry.

I have always felt that if you are aware of the rules, breaking them occasionally is not a problem, so long as you know why you’re doing it. Unless you are writing formally, your words should flow like those of a well-spoken person telling a story out loud. People telling stories out loud don’t follow the rules of grammar, but good story tellers do instinctively follow a less defined set of rules.

Maybe I shouldn’t have meandered quite so much.

I would like to be able to do that with my writing. But there’s a huge caveat to that. I need to work harder on moderating myself. I used to love watching a TV show called “Top Gear”. It’s about cars. I don’t like cars, but I loved the show. It was the style that made it appealing. It was funny and rich and irreverent.

I don’t watch it any more. I can’t. It’s the style that puts me off. It’s just too instantly recognisable and repetitive. It’s become, for me, a bit of a parody of itself. I can see the same thing happening to me. I need to rein myself in before the things that were originally appealing about my writing become teeth-clenchingly annoying, and my blog starts to look like it was written by Dustin Hoffman in Rainman. I don’t want strangers to club together to have me banned from the internet.

Definitely starting a sentence with “but” again.

And once a day, when I least suspect it, she will get to sneak up and zap me for no reason at all. This has nothing to do with my writing. I just think it will make her happy.

Anyhow, enough waffling. Mrs 23thorns’ trigger finger is starting to look a little itchy. This week, I wrote about our chief of police, and his supernatural investigator. I wrote about owls. Twice. I promise never to do so again. I wrote about the Japanese and their space robot, and snorkelling in glasses. And I wrote about my children.

I hope everything was up to scratch last week. I felt like I was dashing things off at the last minute. This will, I fear, continue. The kids are still at home, and next week we’re going away. We’ll see how that goes.

Good luck with the blogging, Dad!

If you do feel like things are slipping, you can get hold of Mrs 23thorns on her blog. I’m sure she’ll be happy to zap me on your behalf. Apart from that, thank you all for reading and I hope you stick with me for the final third. Here’s today’s vote;

If you’ve been following this blog, you will know that I occasionally write about the ecosystem of the Lowveld. These last few weeks, I’ve been writing about owls. Lots of them. I like owls. But I must confess to being just about over writing about owls.

My dreams have become a little peculiar

END_OF_DOCUMENT_TOKEN_TO_BE_REPLACED

Not that I gave them a sledgehammer or anything. They took it when I wasn’t looking. But it did give me an opportunity to be with them without engaging with them, apart from having to relieve them of the occasional sledgehammer. It was educational. END_OF_DOCUMENT_TOKEN_TO_BE_REPLACED

When we woke up yesterday, we had no plans at all. Just another school holiday day with the kids, trying to prevent sibling interaction from escalating to gunplay, and wondering how a nine-year-old who looks like he’s suffering from malnutrition can eat eight kilograms of food a day. Between meals.

By the end of the day, we had stripped all the paint off the inside of our bedroom, made a huge hole in the wall, and plastered it over. That’s how we tend to do things. Just wake up of a morning and decide to go ahead and build a carport or remodel the kitchen. We even had the children like that. Which was a hell of a thing to do on a whim. END_OF_DOCUMENT_TOKEN_TO_BE_REPLACED

The Japanese are sending a man into space. There’s nothing unusual about this; he’s just going up to man the international space station for a while. What is unusual is that they are sending a robot up with him. This is Kirobo.

One day, the Japanese designers of Kirobo hope that they can design robots to actually perform useful tasks up in space, but that’s not what Kirobo’s going for. Kirobo is going up into space to chat to the astronaut. That’s it. He is programmed to have conversations. And take pictures. END_OF_DOCUMENT_TOKEN_TO_BE_REPLACED

I’ve never seen a Bushpig. I have loved wildlife for as long as I can remember, and wherever I go, I keep an eye open for things that creep and crawl and growl and bustle about in the undergrowth. I’ve seen quite a lot over the years, and in terms of mammals, I can page through a South African mammal guide and tick off most of the list, not counting rats and mice and bats, because life is too short. 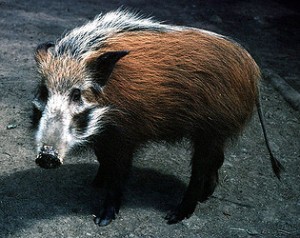 A Bushpig. I think. It might be a Pangolin.

There are a couple of ticks missing. I’ve never seen a Serval, or a Pangolin. But that’s OK. Hardly anyone has. They’re pretty rare. But I’ve never seen that Bushpig, either.  And they are not rare at all. Better yet, they tend to cling on in areas where most other big mammals have been wiped out. They are pests for farmers, and lurk around in thickets along hiking trails and wilderness areas. END_OF_DOCUMENT_TOKEN_TO_BE_REPLACED

He’s a very important policeman. He is the chief of police of South Africa’s Gauteng province, its richest and most densely populated. It’s where I live. Mr Petros (or is that Lieutenant General Petros?) has just had a most unfortunate experience. He was robbed. Sort of. END_OF_DOCUMENT_TOKEN_TO_BE_REPLACED

Well here we are. I’ve officially passed the halfway mark. It’s all downhill from here. For those that are new here, I’m doing 100 posts in 100 days. And trying to get 60 000 views. And failing. I am still getting pretty much half the views I had aimed for. The graph I have been making has no magical uptick in it. It’s rising at a slow and steady 45 degrees. Which appeals to me aesthetically. Or that’s my story, and I’m sticking to it. END_OF_DOCUMENT_TOKEN_TO_BE_REPLACED

Take a deep breath, good people. I am, I’m afraid, going to be writing about Justin Bieber again. Sorry. 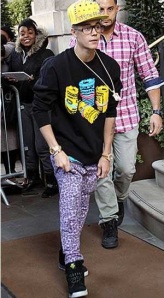 Somewhere out there, the world’s most evil stylist is laughing quietly to herself.

When I was quite small, my parents gave me a stamp collecting kit. There was a book to put your stamps in, a magnifying glass, a special little gauge to measure those holes along the sides, and a bag full of used stamps from around the world, as well as a guide book explaining that my bag of stamps was worth nothing. I still remember the excitement with which they handed it over, having collected stamps themselves when they were younger. “This”, I remember thinking, “blows!” 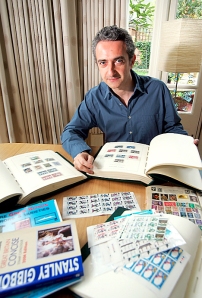 Can you smell the adrenalin?