Something really cool happened the other night. Mrs 23thorns and I were sitting outside having a glass of wine on the stoep (patio). The stoep has a roof over it, and we had the lights on, but the garden was almost in darkness. All of a sudden, two enormous, tawny wings spread out on either side of her head, framing her like some sort of Celtic nature goddess with glasses on. 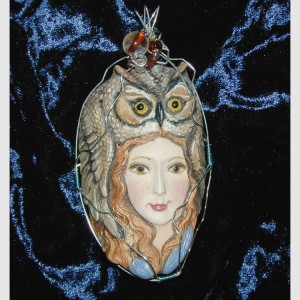 Luckily I was able to snap off a quick photo.

It was an owl. A Spotted Eagle Owl. We have a pair of them living in the neighbourhood. We don’t see them too often, but they are always around. You hear them hooting at each other every now and then, and we see them once every couple of months, perched in a tall tree across the road, or on the neighbour’s chimney. But this was different

The owl that so dramatically framed Mrs 23thorns was spreading its wings to brake. It swooped up less than three feet behind her and landed on the roof right above us, and sat there calmly as we had a closer look. It was beautiful. It made me think immediately of the Black Plague.

Johannesburg is dotted with squatter camps and townships; vast, sprawling mazes of tin shacks criss-crossed by polluted rivers and dirt roads. They overflow with the millions who make their way to the city from the countryside. These places are poorly serviced. The streets are filled with litter and raw sewage. It is a perfect environment for rats.

Every now and then, stories go around about rats the size of cats, and old people or babies getting killed by them in their beds. I’m never quite sure whether to believe those stories. They’re the kind that tend to get spread by email rather than the news, but one thing is certain. Rats are not good to have around. They make people sick. They soil food and carry fleas. And in Europe, they wiped out tens or even hundreds of millions of people by infecting them with the plague.

It adds a new layer of meaning to the American phrase “Aw, rats!”

So why did our owl make me think of this? Well, there are no owls in the townships. There are no cats, either. And there should be. There should be armies of them, lining the roofs and stalking the alleyways. The streets and the sewers are literally crawling with their favourite food. The rats are so safe from persecution that they are losing their natural colour. They don’t have to hide anymore, so instead of just grey, you now get piebald and even white rats. So where are the owls? 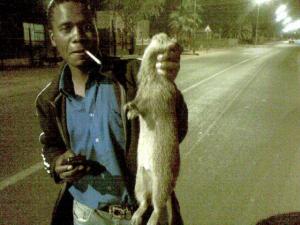 And some of them do get quite big.

Owls are creepy creatures. They live in the dark, for a start, and they move through it with an unearthly silence. They have those huge, staring eyes, and they can turn their heads 180 degrees like that girl from The Exorcist. And so, since the beginning of time, they have been treated with superstitious dread. Here in South Africa, they are harbingers of doom. Death omens. See an owl, and someone you love is going to die.

It’s the same with cats. Breeding cats to have flattened noses and breathing disorders, and calling them Mr Bigglesworth while you snuggle them is a pretty new pastime. For most of our history, certainly among the poorer classes, they, too, have been creatures of the night, melting through shadows, eyes gleaming like searchlights in the dark. They too have attracted dark superstitions. Don’t let a black cat cross your path. Cats were witches familiars. No good could come from having them around.

Most of us reading this now occupy a world that is clean and organised and controlled. We tend to see superstition as a bit of an eccentricity, throwing spilled salt over our shoulders with a self-conscious grin, and joking about it as we walk around open ladders. It’s all a bit of fun (Unless you have OCD. Then it’s a reason to live).

Here’s the thing though. For some of the people in those townships, there’s nothing funny about this stuff at all. There are places in South Africa where people are still burned by their neighbours for being witches. Lightning strikes on houses are the work of a malevolent force, not nature. And some of these people have moved to the cities. Seeing an owl on your roof is as real a sign of oncoming death as a cancer diagnosis is.

I have no idea why people think these gentle creatures are sinister.

And so any cats or owls in the townships are driven out or killed, and the most effective controllers of the rat population are gone. Their numbers grow unchecked. It’s not healthy.

For those of us who live in places where poverty means not being able to eat rather than not being able to make rent this month, some aspects of the middle ages would seem remarkably familiar. People had begun to move out of the countryside and into the towns. The poor lived in ramshackle hovels. The streets were filled with sewage and rubbish. And there were rats. Millions of them. And the owls and cats that could have controlled them were viewed with fear and dread. And I’m pretty sure they too were driven out or killed. And the Plague moved in. I hope it doesn’t do so again.

It makes you wish we all took a bit more time to understand our world. It makes you yearn for a time when nature was our goddess, and we understood her patterns and her rhythms, and knew that the green eyed creatures that stalked the dark were as vital as the bright-eyed cuddly ones that frolicked in the daylight.

That time is probably a myth. Life has always been a struggle, and never more so than when you have to tear it from nature. But not for me. For me that time is real. And it is now. I have, you see, a Celtic nature goddess in my garden, with her glasses perched on the end of her nose and a great tawny owl at her back, wings spread like a herald. The rats round here would do well to stay hidden. 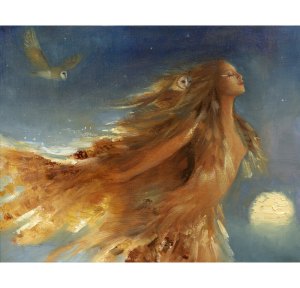 I have begged and pleaded, but Mrs 23thorns refuses to cover up when wandering the streets at night. The neighbours are beginning to talk.