When I first started this blog every day thing, I wrote down a list of potential topics in case I ran out of ideas. I’ve never looked at it. But on that list, tucked away toward the end, I had written five words; “dance like a white man”. It was my son’s fault. 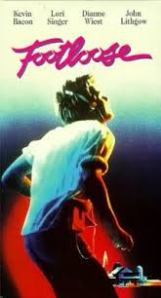 This movie was based on my childhood. But the town only banned dancing after I moved in.

My father was a big man. He was six foot four and over a hundred kilograms. He did not melt into the background at the best of times. But take him to a wedding reception, and he would really come into his own. Sooner or later, the DJ was sure to hit the right note. A song from the 60’s would come on, and my father would loom onto the dance floor. Then it was on. He wasn’t actually a bad dancer. He just had an interesting quirk or two. He would, for reasons I was never able to understand, stick his tongue out and roll it upside down. And he would spend at least half of his time with his eyes closed. Losing yourself to the beat is all very well if you’re a 65kg hippy dancing in the firelight out on the beach, but I always felt a little concerned for all those poor little grannies and maiden aunts and awkward teenage boys who suddenly realised that they were sharing a small wooden platform with an enormous blind man who was lurching around at a healthy clip with his tongue hanging out like a basset hound on a hot day. I’ve never seen myself dance. Others have. From a suitable distance. This is probably better for everyone. When I was at school, I used to play squash. It was no easy thing to find someone willing to play with me. This was not because I was particularly good. Nor was I particularly bad. I was, however, particularly likely to draw blood.

What do you mean you’re not keen for another game?

It’s always been quite hard for me to understand. I could always do what needed to be done. My racquet was always in precisely the right spot to send the ball back at the spot I had chosen. It was just that I seemed to have little or no control of where it would be before and after that. People got hurt. I could do a somersault or a flick flack. My body would go through the prescribed number of rotations, and I would land on my feet. But I had no control of where my limbs would be during the process. People got hurt. And so it is when I dance. I have more elbows than everybody else, and my hips seem to be capable of leaving my body to exact a terrible revenge on anyone foolhardy enough to carry a drink across the dancefloor. People get hurt. Then my son was born. And lo and behold, the cycle was broken. He had rhythm! Long before he could talk, he would tap along in perfect time to whenever we played a song. If he was really into it, he would bob up and down like a tiny headbanger, never missing a beat. He was brilliant. Then he went off to school. Life went on. A year or two passed. And then one day, he came home and stood in front of us, chest swelling with pride, and said “Mom! Dad! Do you guys wanna see my moves?” Of course we did. He was our little Fred Astaire. It was going to be so cute!

He used to look like this, too, but then the school took away his pimp-cane.

He dashed off to put on what he described as “Some beats!” He cleared a space on the carpet. And then it started. It was breathtaking. His body began to shudder and twist like one of those charismatic preachers feeling the spirit. I leapt to my feet, thinking he’d had a stroke. A foot shot out and hit the door, slamming into it hard enough to send him flying in the other direction. We thought he was going down, but he grabbed the corner of a table and flung his legs up into the air like a kicking mule. He paused. And then he really did go down, collapsing to his knees like that guy in Platoon, and toppling forward   onto his elbows. We thought it was all over. But then he began to quake and shudder again. My wife dashed off to get a coathanger to stop him from choking on his tongue. His arms began shooting out like a cat trying to catch the red dot from a laser pointer. His legs flew out to one side and he began to scoot around in a vaguely defined circle before he spun over onto his back with his arms folded and one foot up in the air. “What”, he said, like the world’s most self-assured pile of builder’s rubble, “did we think of THAT?!?” Holy shit! I left my wife to stretch the boundaries of diplomacy and went to pour myself a drink.

Amateurs! My boy can do all of these moves at the same time!

Sometimes things turn out for the best. His friends introduced him to a game where you get points for dancing like Michael Jackson. Thanks to the twin miracles of peer pressure and Skinnerian conditioning, we might just be OK. But I’m not going to write about what  bad dancers we are. From where I’m standing, we’re actually looking pretty good. Because I just Googled Peter Garrett. Peter Garrett is an interesting guy. He’s a politician in Australia. He’s a bit of an environmentalist and a social activist, but like all politicians he wavers between commitment and compromise. But that is not always who he was. This is Peter Garrett.

No, that is not Lurch from the Adams Family. That is the lead singer of Midnight Oil. I loved Midnight Oil. The music was good. They were socially conscious. They were environmentalists. The singer looked like an axe murderer. But I had missed something. In my search this morning, I found this; Is it not a thing of surpassing beauty? Peter Garrett is the single worst dancer in the history of mankind. If you see worse, you can be sure that it’s all a bit of a joke. An act. But I have to believe this is real. Midnight Oil were singing about human rights. They were not a novelty act. How had I missed this back in the 80’s? The man is an inspiration. He has not been cursed with a single, awkward style. He tackles them all with gay abandon. He is as fearless as he is uncoordinated. If you haven’t done so, give the video a look. It’s like the van Gogh’s Sunflowers of human movement, something beautiful and disturbing plucked from a twisted and tortured psyche. It’s all there. He flails his arms around without moving his feet, like a man stuck in hot tar. He pushes his arms around like the world’s most uncoordinated mime, desperately reaching for the walls of a see through box made mobile by high doses of LSD. He does jazz hands. Jazz hands! He tackles the Michael Jackson spin with reckless abandon, covering fifteen square metres while trying to turn on the spot. He thrashes the air in a public road like he’s being attacked by bees. He sashays, hands on hips, like a schoolgirl model. He stamps out imaginary fires. He will try anything. And fail. The only unifying theme is that his feet are reluctant to keep up with his body and his arms have disconnected from his brain and are desperately trying to escape that terrifying, cavernous head. 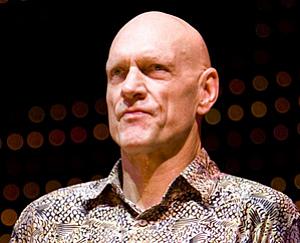 He is required by law to wear a wig and a large pair of sunglasses when he goes to children’s parties.

He has a gift. A rare talent. He is a work of art and I wish he was ours. Because he looks like he’s having a ball. It’s like he sat down in front of a mirror when he started out and said “Right. I’m the front-man for a band. And I can’t dance. I can either sit there on a stool like a muppet, or I can set the world on fire.” And that, my friends, is why the beds are burning. But don’t worry. He’s doing his best to put them out. I do apologise if seeing that upset you. I know that there are lovers of beauty and grace out there. Aesthetes. And I put you through that. Sorry. Don’t worry. I’m going to make it up to you. Here is a clip filled with style, and poise, and elegance, to bring balance back to the universe; Holy, as I said earlier, shit! I just hope you were sitting down when she cut the noose. And set it loose.