I’m going to be cheating today. Kinda. I’ve signed up for a local news-satire site called ZaNews to try and put myself out there a little. Because at some stage, I’m hoping someone will pay me for some of this, so that I can claim to be a writer and look windswept and interesting at parties. 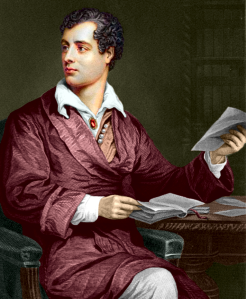 This? Oh, it’s just a little piece I wrote on public sanitation. Care to dance?

And so I spent the morning writing about politics. I know I promised I wouldn’t, but  it was the good kind of politics. The kind I actually like writing about. The kind starts with two young men driving around in a car full of  portaloo tanks and ends up with rivers of human waste flowing down the steps of government buildings. Yay.

There are only so many hours in the day, so I’m going to share the piece I wrote with you. Let’s all pretend it’s because I don’t want you guys to miss out on anything, and not at all because I’m tired now.

The good people of the Western Cape are at it again. They’re fighting about toilets. Again. In protest against the fact that portaloos weren’t being emptied often enough, a group of young men who spent a rather suspicious amount of time denying that they were acting for the ANC Youth League emptied some outside the office of the DA, their opposition.

They say actions speak louder than words, but in politics, they can be pretty much same thing.

So here, then, is what I sent off in my bid for fame and fortune, or at least a little bit of street cred. Hope you like it;

Up to our necks in it.

Something wonderful happened yesterday. A group of protesters not even vaguely connected to the ANC youth league emptied the contents of five portaloos onto the steps of the Western Cape provincial legislature, mildly inconveniencing Helen Zille and her DA colleagues, who had to wait inside for at least 20 minutes while the ANC-supporting janitorial staff cleaned up the mess. Nice.

This was a warning shot. An opening salvo in next year’s election campaign. Two of the not-even-vaguely-connected-to-the-ANCYL guys, ANC councillor and youth league member Loyiso Nkohla, and ex youth league member Andile Lili, arrived with the plastic tanks full of poo in the back of an Audi. ANC Youth League regional secretary Mfuzo Zenzile was quick to distance the league from the incident.

You cannot help but be impressed. Because this wasn’t a spontaneous outpouring of rage. This was planned. These guys sat around a table and thought this through. The DA had better watch their backs. They aren’t dealing with an unruly mob. They are dealing with a shadowy group of political masterminds.

Opening with the Queens Gambit, eh? I will easily counter it with the Plastic Pootank Defence!

Just close your eyes and picture the scene;

A small group of people sit around a table in a dimly-lit room completely unconnected to any rooms the ANCYL might use. The only light comes from a single unshaded lightbulb swinging gently from the ceiling.  Loyiso Nkohla is there, but not at all in his capacity as a high ranking ANCYL member. He is chatting quietly to Andile Lili, ex ANCYL member. EX. There are five other people in the room, talking to each other in low, conspiratorial voices. Let’s call them A, B, C, D and E. Nkohla stands up and clears his throat; 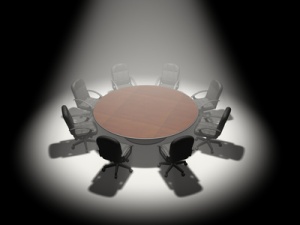 Unshaded lightbulbs work differently in South Africa, because the light is much heavier here.

Nkohla;                “I suppose you are wondering why I’ve called you here today. It is time for us, as private citizens who have nothing to do with the youth league, to unveil our strategy for next year’s election.”

Nkohla;                “Andile and I have thought about this long and hard. We need an issue that stirs the emotions of the people. That makes those godless elitists at the DA look indifferent to the suffering of the masses.”

He slams a fist down onto the table, rattling an empty teacup in its saucer and knocking over a glass of water. B slowly raises a hand, looking cautiously round at his co-conspirators.

If only our politicians would all sit down together, and push through some sort of compromise. Sorry.

He looks up and sees that B still has his hand in the air.

Nkohla rises to his feet again, leaning forward with his fists on the table.

He pauses for a moment, looking around the room. Another moment. People begin to shift awkwardly in their chairs.

Nkohla;                “Right. Let’s get this meeting back on track. Here’s the plan. We’re going to make the Western Cape ungovernable. With poo! In phase one; we will be taking the tanks out of every unemptied portaloo in Khayelitsha to the legislatu…. What now, B?”

A shadowy figure enters the room and looks around.

He winks broadly at the group and stifles a snigger.

Mystery man;       “You’re a good man, Loyiso. A real soldier for the cause. I wish everyone had your dedication. Keep up the good work!”

He leaves, and all eyes turn back to Nkohla, who has swelled up with pride. 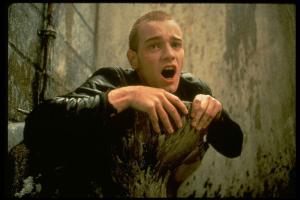 In order to become a member of the ANCYL, candidates undergo a rigorous selection process.

It looks like it’s going to be another fun election. I wait with bated breath for the DA to find a nest of unemptied ANC portaloos. Then we can really get started! One thing’s for sure. We’re all going to be in it up to our necks until the whole show is over.

26 thoughts on “37. And you thought we were done with the toilets.”