There are few things in this world quite as cool as going on a night-drive in the bush. You bundle into an open vehicle with hand-held spotlights and set off into a world completely different to the one you left as the sun went down. 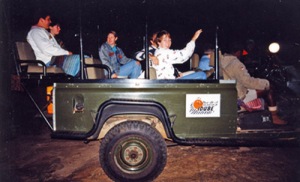 If you pay a little extra for the premium package, your hosts might even take you out in a vehicle with a door.

There is no colour, for a start. The world is revealed in shades of light and dark like an old black and white movie. It sounds different, too. A different set of insects is awake, frogs are calling, and on the right night, that’s when the lions roar and the hyenas whoop.

But the main reason you go out is because there is a completely different set of animals on the prowl. Gone are the Warthogs, the Vervet Monkeys and the Baboons. The birds that fill the day with their colour and sound have gone to sleep, and the bats and owls are out and about, flitting and gliding through the shadows like flakes of animated darkness. Sleek, slinky creatures like genets and wildcats pad noiselessly through the undergrowth, and if you’re lucky, this is when you’re most likely to see leopards and lions. And tiny monkeys. 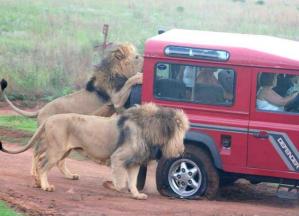 I’m really not trying to put any pressure on you. I’m just suggesting that it might be worth upgrading to the premium package.

Those little reflective bumps that mark out the lanes of roads are called cat’s-eyes for a reason, because that’s how you find most things at night. You sweep through the bush with the light of your spotlight, seeking out open channels through the undergrowth and shining up into the trees. Every now and then, you will be rewarded with a pair of lights shining back at you.

They can be green or yellow or red. Lions’ eyes tend to be yellow, and spread quite far apart. Herds of Impala have green eyes, spreading out through open patches like rivers of stars. And every now and then, if you shine up into the trees, you will see a huge pair of bright red spotlights beaming back at you.

The lion, master of the night, king of the African wild. Isn’t he majestic?

If you stop and watch them for a while they will, if you’re lucky, suddenly launch themselves through the air in a great, soaring arc, pausing for a second as they land in a nearby tree before launching themselves again. If they jump down to the ground, they bounce straight back up again, like a tennis ball on steroids. You are looking at a Lesser Bushbaby. 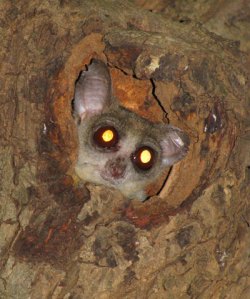 And he is looking at you.

I wrote a post about a tree the other day. A Lowveld tree. It reminded me that I have been neglecting my posts on the Lowveld of late. So here we go. Whether you like it or not, you’re hearing about monkeys this week. Lowveld monkeys. I’m starting small, and working my way up. And Bushbabies are small.

What they are not, of course, are monkeys. They have far more in common with Madagascar’s lemurs. But they are primates. So they count.

They are tiny. At least the Lesser Bushbabies are, weighing in at 150g. They have fingers just like people, with the same rounded fingernails. They have ears like bats, and they are almost as sharp, sensitive enough to track a moth in flight and snatch it from the air. They have large, fluffy tails to help guide them through the air as they jump. And they have big eyes. Ludicrously big eyes. If you scaled their skulls up to human size, their eyes would be as big as footballs. They are so big that they can’t move around in their sockets, so the Bushbaby has to move its head to look around, giving it a peculiar owl-like quality.

Bushbabies are always surprised to see you.

All this makes them cute. Stupidly cute. I am not a sentimental man. I only find other people’s children appealing when they are relieving themselves on someone else’s bookshelf. But I melt when I see a Bushbaby. And a baby Bushbaby is almost too much to cope with. Look;

Your failure to click on the “Buy me a beer” button has made this bushbaby baby sad.

They live on insects and tree gum. They catch the insects by leaping into the air and grabbing them in their hands. And if tree gum sounds like an odd thing to eat, if you’ve ever eaten fancy confectionery with gum Arabic in it, you’ve eaten it too.

Their diet has led to the development of a rather unusual feature. Gum, you see, is a little bit sticky, in the same way that water is a little bit wet. It gets stuck in their fur. But they have come up with a rather elegant solution. Teeth. They have evolved their very own built-in comb. Evolving funny shaped teeth is not, in itself, unusual. The English have done the same thing. What is unusual is that they have also evolved as second tongue to keep their toothcombs clean. Which the English, to the best of my knowledge, have not yet done.

The “toothcomb” is also ideal for sqwooshing jelly through to make it runny.

There is another type of Bushbaby down in the Lowveld. It lives in forested patches. Our little patch of the bush doesn’t have any forested patches, so I have hardly ever seen them. They are much bigger, and move around in the branches more like cats than self-propelled ping pong balls. It was they who earned the tribe the name “Bushbaby”. They are not called that because they are small and cute. They are called that because the greater Bushbaby has a call that sounds uncannily like a crying baby.

The world is a cruel place. the bigger you are, the cuter you aren’t.

There’s a story I’ve heard down in the bush a couple of times about a ranger who had a Lesser Bushbaby as a pet. He would take it with him to the pub at night, where it would do it’s best to cadge a drink or two from the regulars. It would fail. None of them would let it come anywhere near their beer. But sooner or later, it would find a tourist who, charmed by those enormous eyes and tiny man-hands, would let it share his drink.

Then the fun would start. It wasn’t a greedy drinker. Wild Bushbabies hardly drink at all. It would simply dip in a tiny hand every now and then and then suck off the beer. The tourist would sit there, glowing with joy at really connecting with the wildlife, quietly working on the story he would tell his friends as he matched the tiny primate sip for sip. And the locals would sit snorting into their own beers, refusing to meet each other’s eyes until the last drop was drunk. And then it was time for the ranger to go and retrieve his little friend, and tell the tourist a little bit about him, while the regulars fell about laughing.

Because Bushbabies have a dirty little secret. Every now and then, as they make their way through the trees, they stop to for a pee. On their hands. They quickly rub half of it onto their feet and set off again.

It used to be thought that they were doing this to improve their grip. But that’s not what they’re up to. Bushbabies are territorial. Like most territorial animals, they need to mark their territory, like dogs lifting their legs or rhinos building huge latrines along their borders. But that’s not so easy when you live in the treetops. Their territories work in three dimensions, for a start. And gravity doesn’t help. So they’ve found a rather elegant solution.

Little did they know it, but Evans and Jones were squandering yet another opportunity to make their mark at Spooner, Withers & Haversham.

Wherever they go, they leave a handy little trail behind them. Of pee. This makes it easier for them to establish pathways through the trees and lets the neighbours know to keep out.

And that would be just about it, except for one rather wonderful thing. The Bushbabies are coming to town. My mother still lives in the house I grew up in. A few years ago, my father put a nesting box up in one of his trees to attract owls. No owls were attracted. What was attracted was a small family of Bushbabies. 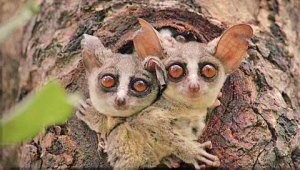 Every evening, just before dark, they poke their heads out of the entrance hole, all ears and eyes, for a bit of a look around. Then they make their way carefully down to the hummingbird feeder hanging outside the kitchen for a shot of nectar. If you sit very still, they will come to within a few feet of you.

This is a new thing. Over the last few decades, people have been planting more and more indigenous trees, and those trees are now coming of age. And the suburbs are now full of Bushbaby food.

My mother lives in a different city from us. But there’s hope. My son’s school is just around the corner from us. And it is home to several families of Bushbabies. I have put up an owl box myself, to the echoing indifference of the local owl population. But maybe, just maybe, we too will one day find ourselves sitting outside in the evenings with a chilled glass of wine, while a tiny, goggle-eyed, bat-eared proto-monkey tracks an invisible line of pee down to a feeder in front of us. And that would be a fine thing indeed. 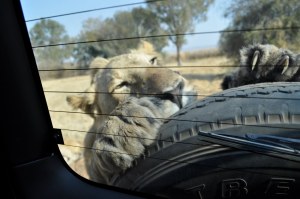 Premium package. Just saying. The seats are more comfortable, and you get a free drink.