If I say the word “monkey” to you, a whole bunch of associations are sure to be triggered. First of all, you will picture a cheeky little scamp, a charming, miniature man-beast who lives to laugh and play, swinging through the trees playing practical jokes on his companions and eating bananas. If you’ve spent a bit of time in zoos, you might also picture a certain amount of self-abuse and poo flinging. And this is how you will picture his home;

With a tree or two in it.

And that might just explain everything else about them. Because they are not cheeky little scamps. They are not charming, and they don’t laugh and play nearly as much as you would suspect. They are, in fact, vicious, criminal little thugs. Say hello to the Vervet monkey.

If I seem a little disapproving of them, I’m not. I think they’re awesome. What they are not, however, is “cute”. If you look at the picture of the jungle up there, where monkeys evolved to live, you’ll see that it’s almost all tree. Which is a nice place for monkeys to live. They live concealed in the leafy green treetops, almost permanently surrounded by food of one sort or another, out of reach of terrestrial predators, prey only to the odd eagle or snake. Not so much with the Vervets. If you look at the savannah picture, you’ll see that it’s more grass than trees. The trees are also smaller, with open, small leafed canopies. There is no safety here. The Vervets are under constant pressure from predators on all fronts. Up in the trees they can get taken out by eagles and owls, snakes, and the odd particularly agile leopard. On the ground, there are more snakes, lions, hyenas, jackals, caracals and a multitude of others. They are even preyed upon by their cousins, the baboons. And they can’t hide away up in the treetops, either. Because the savannah is a much poorer place for monkeys than the jungle. Finding food is a constant struggle.

There is little time for simply hanging out with friends.

The seasons are more pronounced. There is no fruit around in winter. There are hardly even any leaves. The monkeys need to come out of the trees to supplement their diets and to drink. And supplement they do. They are omnivores. They will eat whatever they can get their hands on, including insects, eggs, and fledglings. All this makes the Vervet Monkey a fairly serious animal. When I was younger, we used to play a game with them. When they gathered around our place in the bush, we would go out and dance with them. Not cheek to cheek, mind you. Those things have fleas. When you looked at one, it would suddenly stare right at you and bob the whole front of its body up and down. We would bob back at it. It would bob to the side. So would we. Up, down, left and right we would go, and so would the monkey, staring harder and becoming more and more exaggerated in its movements as the dance went on. What fun and games we had with our little friends. Or not. I later found out that what the monkey was doing was a mortal threat. A prelude to opening up a can of whoop-ass. It was the monkey equivalent of spreading your arms out and shouting “Come at me, bro!” It was a threat we would have done well to heed. We were probably safe, because these were wild monkeys, but people get bitten by them often.

Many seemingly innocent wild animals are more confrontational than you would suspect.

Because Vervet Monkeys love people. Or rather they love our food. If you spend your time scrabbling a meagre existence from the desiccated savannah, finding a creature that leaves vast piles of food lying around is a godsend. There is hardly a hotel in South Africa that doesn’t have its own troop of Vervets. They dart in at any given opportunity to grab scraps left on tables, or buffet displays. They even break into houses. If we ever left a door or window open down in the bush when they were around, we were sure to be treated to the sight of an awkwardly two legged monkey running off into the distance with arms full of oranges and apples or even the occasional unfeasibly big melon. They have even moved into the suburbs, making life a misery for the residents, who have to be constantly alert. They get so bad that there’s even a show about them on the Discovery Channel which is basically just a video montage of them stealing things that don’t belong to them. 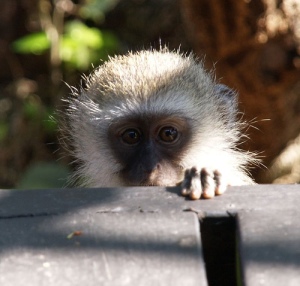 The unacceptable face of suburban crime.

The ones who haunt busy hotels can be a huge problem. Because they get tame. Ish. They lose their fear of people. They are smart enough to learn to recognise the hotel employees who drive them off at every opportunity, but will come right up to tourists. And that’s where the problems start. Because they don’t want to be friends. When someone, often a child, gets too familiar, things go to hell. They bite. With these; 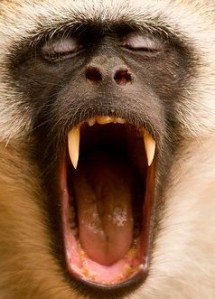 Those teeth are not there for eating berries.

Something else rather odd happens at some of these hotels. The Vervets become alcoholics. People leave half empty drinks lying around pools or out on patios, and the monkeys help themselves. And they are just like people. Some abstain. Some have the odd tipple. And some become hardened drinkers. This shouldn’t come as any surprise. Vervet Monkey’s lives are a constant political struggle. Every day is like a game of survivor. They live in troops of twenty or more, and have a strict hierarchy, enforced by violence. They make alliances, by grooming favoured companions, and allies will unite to take on enemies.

This monkey is deeper in intrigue than the whole cast of “Game of Thrones”.

Young males get bullied but the two or three senior males in the troop, and get driven out to move into neighbouring troops to start the long climb up the social ladder. The females inherit their status from their mothers, but can lose it to a stronger competitor, or one with better allies. The political game makes them vindictive; they have been seen wilfully destroying their enemies’ food, rather than simply eating it themselves, out of something very much like spite. All this proves a little stressful. they have been diagnosed with hypertension and anxiety disorders. So not so much the whole “carefree monkey” thing. More the “one more drink for the road” thing

One more drink and he’s going to pick a fight with the bouncer.

The constant struggle of their lives has given them one thing. It has given them something very much like language. With so many predators around them, they do, despite their differences, depend on each other. The more eyes there are looking out for predators, the better their chances, so whoever spots a potential danger gives a warning call. But a warning call is not enough. If an eagle is coming after you, you need to behave very differently to the way you would if a snake popped up next to you, or if a hyena came rotting along. So they have a number of different warning calls. One for birds like eagles, one for snakes, one for ground predators, and even one for us. And the one for us is, interestingly enough, almost identical to the one for snakes. 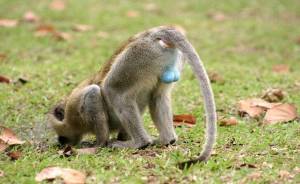 Vervets are very vulnerable when on the ground.

You could spend a lifetime studying creatures as common as Vervets, but that sort of covers the basics. Except for on thing. Their name. Vervet. It means nothing. It sort of looks like it could be somebody’s name, as in Burchell’s Zebra. But it isn’t. It sort of looks like it might be French. But it isn’t. It is simply a gibberish word. Balderdash. Gobbledygook. And that will not do. It’s always bothered me. But I’ve never been in a position to do anything about it. And now I am. Thanks to you guys. Together, we can make a difference. Together, we can make sense. Here’s what I’m thinking; we need a name that will tie into the animal itself. A name that both describes the animal and makes it easy to remember. A name that fits. Let me show you what I mean. This is called  a Proboscis Monkey. Guess why. 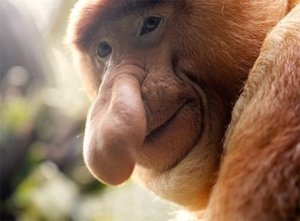 It’s because it has quite a big nose.

This is called a Helmeted Guineafowl. Guess why.

It’s because it’s wearing a helmet.

This is a Horned Adder. Guess why. 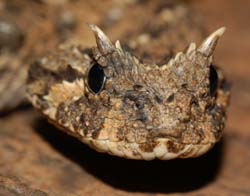 It’s because it has horns.

I’m sure you a picking up the trend here. Lets find a name that fits. that works. That describes as well as identifies. So what about this guy? 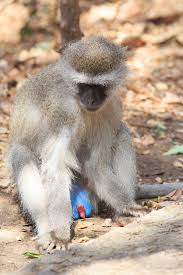 Look back at all the pictures on this post and see if anything springs to mind. If there’s not something that leaps out at you. Lets agree on a name and get this set right. I’ve started you off with a couple of ideas.