South Africa is a modest country. We are quite small, and not hugely rich. But in some things, we punch above our weight. We rock at cricket and rugby. We are world leaders in home and vehicle security. And now we have another feather to add to our caps.

This is Andre van Zijl; 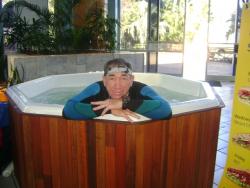 He’s a world beater. A record breaker. Andre van Zijl is, as we speak, breaking the world record for the most hours spent in a jacuzzi. For those who may not know, a jacuzzi is what we South Africans call a hot tub. He’s going to spend two weeks in one. In a wetsuit. In a busy shopping centre.

It’s for a good cause. He’s raising awareness of and funds for a children with HIV campaign. He’s doing it for a good reason. Mr van Zijl has been HIV positive for 32 years.  And he’s no Johnny-come-lately, either. He has eaten 150 pieces of sushi with chopsticks in under 10 minutes, cycled round South Africa, and climbed Table Mountain in a pair of roller skates. This is a man to be reckoned with.

Which makes me feel a little uncharitable. Am I the only one who feels that there’s something a little unsavoury about this? I’ve never owned a Jacuzzi. I can count the number of times I’ve been in one on one hand. But they are, for some reason, forever associated with the whole seventies swinger scene. Jacuzzis are places where slightly pudgy middle aged people congregate in pale, nakedly hairy groups to a Barry White soundtrack. Ahhh yeah.

I am, no doubt, a product of my time. I’m sure a younger generation associates jacuzzis with raucous groups of MTV reality show contestants pushing the boundaries of good taste in a misguided attempt to turn a 15 minute TV appearance into a career. But that’s not so great either.

These worthy people should in no way be connected in our minds to Mr van Zijl. He is, as I said, wearing a wetsuit, for a start. But there are other concerns. If you tell me that you have never had a wee in a quiet corner of a swimming pool I will look you in the eye and call you a damn liar. Mr van Zijl is going to be sitting in his Jacuzzi for 300 hours.

He is allowed to leave his warm, wet haven for five minutes an hour, to take care of his baser functional needs and, rather curiously, have a shower. But I refuse to believe that, in the small slow hours round midnight, he won’t look around, see no one, and, contemplating the long, cold hike to the gents, make a few snap decisions that directly affect his immediate environment.

We’ve all been there.

On top of this, 300 hundred hours of highly chlorinated water are going to be doing some interesting things to any exposed skin. It all adds up to a rather interesting van Zijl soup that might just break a couple of records itself. Scientists have been trying to crack the code for the creation of new life for centuries.

This is really unsafe. Those beers are far too close to the edge of the table!

I might be poking a little fun at Mr van Zijl, but the truth is I cannot help but be impressed. The world needs people like this. Last weekend, I went to a game reserve and then lay around on a couch watching my offspring recreate the opening scene of Gladiator to see who got to put strawberry jam all over their mom’s iPad. Mr van Zijl lay alone in a small pool of foul, tepid water in the middle of a crowd of strangers to raise money for a bunch of suffering children he’d never met. He’s a better man than I am.

Whatever else he’s done, he’s inspired me. No, I’m not going to hang upside-down over a pool full of crocodiles this weekend while repeatedly solving a Rubik’s cube to raise money for a donkey sanctuary. But I am going to see Mr van Zijl. And I’m going to give him some money. I’m not going to shake his hand though. After a week in the tub, he’s going to have the world’s most epic case of “granny fingers”, and nothing in my life has prepared me for having part of a stranger’s hand break off in mine. 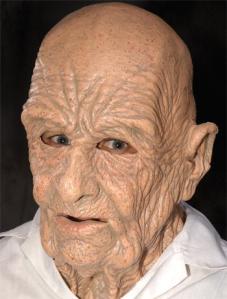 If you’re into soggy men in wetsuits (I’m not here to judge), you can see him http://www.andrevanzijl.tk/.