Well here we are. I’ve officially passed the halfway mark. It’s all downhill from here. For those that are new here, I’m doing 100 posts in 100 days. And trying to get 60 000 views. And failing. I am still getting pretty much half the views I had aimed for. The graph I have been making has no magical uptick in it. It’s rising at a slow and steady 45 degrees. Which appeals to me aesthetically. Or that’s my story, and I’m sticking to it. 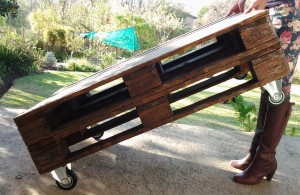 Straight and unwavering like an elegantly crafted used-pallet table lifted at an angle.

This makes it look like things are just getting better and better as time goes by, but that’s just a case of lies, damn lies, and statistics being hard at work. The 45 degree graph is accumulative. It was always going to go upwards. But if you look at it from a views-per-day point of view, it’s been pretty flat. Which is not to say I’m unhappy- my blog is doing better than it ever has. It’s just not doing the 600 views a day I had naively aimed for.

As flat and smooth as a cleverly repurposed piece of industrial furniture put together by a naturally gifted carpenter.

There is trouble on the horizon. The children broke up from school this week. We’re stuck at home with them for the foreseeable future. Which is nice. But not good for daytime blogging. I’m going to have to shuffle my schedule around a bit so that I’m free to act as a ref in the 23 thorns version of Wrestlemania. On top of that, the boy-child got a PlayStation for his birthday today. The TV room is about to become a real-time re-enactment of the battle of the Ypres.

It’s a double edged sword. Children, given enough freedom, and a little bit of subtle goading, are endlessly entertaining. I’ll have lots to blog about, but less time to do it in. Oh, well. I suppose the whole point of this was to challenge myself. Even if it is tiring.

Just thinking about it makes me want to lie myself down on an elegantly crafted but, unbelievably, home-made objet d’art.

And then things got interesting. School broke up for the holidays on Friday. I celebrated by buying a pile of used pallets and making a coffee table. Which was fun. But didn’t leave much room for blogging. I dashed off a quick post about hobbies. I didn’t like it. It felt rushed. Featureless. Wooden.

But hopefully with a little bit of character, like well-sanded, attractively-stained repurposed wood.

Luckily, it turns out that there are lots of people out there with peculiar connections to stamp collecting. It actually went down quite well. Saturday’s post was even more rushed. I didn’t even know what I was going to write about until eleven o’clock at night. Luckily, the news came to my rescue. Some demented freak just bought Justin Bieber’s used vest for a large sum of money. I dashed off another quick post about collecting, which was basically just a repeat of the hobbies post. I was worried about that one, too. I hadn’t given myself enough time. It felt a bit flat. Second hand. Tired and worn out. 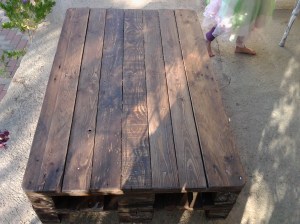 Which is stunningly attractive in an outdoor fixture that someone might have made in a driveway on a Friday afternoon, but not so much in a blog post.

Luckily, it turns out there are lots of people out there with a peculiar affection for Bieber’s diaper-pants. It seems to have gone down OK too. Which is a good thing, ‘cos that’s how things are going to be for a while. Not only are the kids at home all week, we’re going away, too. We’ll see how that goes.

Maybe they can do arts and crafts in beautiful surroundings.

Anyhow, eight weeks down, six or so to go. Wish me luck. Here’s today’s vote. I know that I had promised to post a picture of the used pallet coffee-table I was making, but I don’t want to seem self-satisfied and boastful. You decide;