If you’ve been following this blog, you will know that I occasionally write about the ecosystem of the Lowveld. These last few weeks, I’ve been writing about owls. Lots of them. I like owls. But I must confess to being just about over writing about owls.

My dreams have become a little peculiar

I’m sure you all feel the same. But come with me one last time and we’ll be done. These are the big ones.

And having just told you that, the first owl actually isn’t all that big, only about 700g or so. But I have a soft spot for spotted eagle owls, because there is a pair of them that visits our home every now and then. We will be sitting outside as the sun goes down, and hear a quiet hoot or two. We know where their favourite roosts are, so all we have to do is stand up and there they will be. And they look pretty big in the suburbs.

I, too, am big in the suburbs.

Surprisingly, for a fairly big owl, they, like many of the owls I’ve written about, live mostly on insects. They also eat a fair number of rodents and birds. And they eat something else, too. They eat carrion. This is just super down in the Lowveld, where everything obligingly kills everything else, and leaves the scraps lying around.

It’s not quite so super everywhere else. Where man has moved in and removed most of the ecosystem, the major source of carrion is roadkill. Lurking about on busy roads at night is not a very sensible thing for a large bird to do. They, too, become roadkill. Often. So much so that on my most recent trip up to the bush, I saw a road sign warning not of deer crossing, but of owls.

If this doesn’t make you feel sad enough, I can throw something else. Spotted Eagle Owls mate for life. They get married. Those calls I was talking about earlier are as much to serenade their spouses as they are to advertise their territory. And they form part of a duet. Which means that for every owl driven over by a careless or unknowing driver, somewhere out there is a sad and lonely “Too-wit” without a “too-woo”.

And now, at last, we get to the big buggers. The Pel’s Fishing Owl is properly big. It weighs about two kilograms, which is massive for a flying bird. You would think that this would let it stand out in a crowd. No. This is a sneaky, sneaky owl. 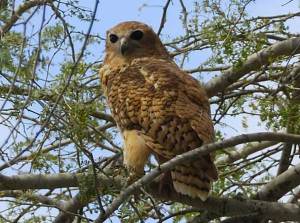 This one is letting the entire species down by being bad at sneaking.

So sneaky is it that for years no-one knew it occurred in the Lowveld at all. But they are there, lurking along the perennial rivers. There are not a lot of them, but even those that are there are hardly ever seen. There are a couple of reasons for this.

Firstly, there aren’t a hell of a lot of perennial rivers in the Lowveld. And secondly, the ones that are there are surrounded by tall, dense trees, like elongated oases of forest in a sea of open savannah. But most of all, Pel’s Fishing Owls are very good at hiding.

There are seven Pel’s Fishing Owls in this picture.

They have to be. Most owls eat other birds when they can. As a result, they get mobbed mercilessly by other birds if they are exposed during the day. I’ve actually spotted a couple of owls this way. Your attention is attracted by a cloud of shrieking and clamouring birds. Small birds. Starlings and seed-eaters and the like.

Which is a very good reason for the Pel’s Fishing Owl to hide away.

Pel’s Fishing Owls, surprisingly enough, live on fish, mostly barbell, and have specially adapted claws for the purpose. When they get bored they might take a crab or a baby crocodile or two, but they are fairly specialised.

I’ve never seen one, and probably never will. Even dedicated birders are lucky to spot them. But it’s nice to know they’re there.

This is the big guy. He’s the third heaviest owl in the world. So big is he that he used to be called the Giant Eagle Owl. Which seems pretty sensible to me. But not to the people who take it upon themselves to rename birds at random.

They weigh over two kilograms, slightly more than the Pel’s. And live like it. Like most owls, they will take rodents. But they don’t stop there. They eat birds. Big birds. They will happily take down ducks and geese. As a starter. They also cheerfully eat other owls, and birds as big a Secretary Birds. 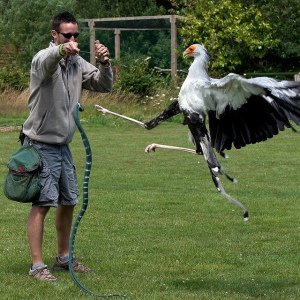 Which is this big, and does karate on snakes.

They eat bigger mammals than rats, too. They will take half-grown monkeys and baby warthogs, and have been seen flying with a 1,8kg mongoose, nearly their own weight.

There is something awe inspiring about them. They just look massive and powerful. And they sound like it, too. They grunt. Like pigs. The first time I heard them, they scared the life out of me. I was walking alone through some thick bush when I heard a guttural “Hunk hunk.” I spun around, coiled and ready to take whatever action a soft pink thing could take when confronted by an angry beast, but there was nothing there. 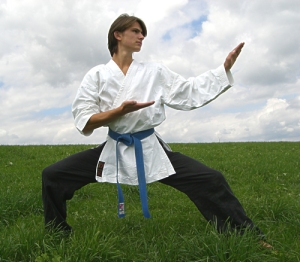 And it was damn lucky it wasn’t. I know a bit of karate myself!

I only realised a few years later it was just an owl. A two kilogram, two foot tall owl with freaky pink eyelids, but an owl no less. Because yes, they do have freaky pink eyelids. And no, I don’t know why. It must have something to do with communication, because they really do stand out.

The Verreaux’s Eagle Owl is one of the few birds capable of showing embarrassment.

They, too, are mobbed by raptors, but it doesn’t seem to bother them as much. They frequently hunt during the day, and besides, they sometimes catch and eat raptors, so maybe it’s just a case of them playing with their food.

And that, good people, is that when it comes to owls. I will never write about them again, I promise. Unless our garden owls try to take one of the children. That might be worth a post or two.