A little allusion for the Jung at heart.

I haven’t read much news this week. I’ve been a little busy. A lot busy. That’s my excuse for not responding to any comments, too. Sorry. It’s also my excuse for writing a short post today. And for global warming.

I am glad that I did take the time to glance at the headlines today, because something important is happening. Someone is selling a car. But not just any car. This car.

They won’t get much for it. It doesn’t have any wheels.

It’s the submarine car from the James Bond movie “The Spy Who Loved Me”. For real. It’s the one that could actually zip around under water. How it come to be on sale is quite a nice story. Someone bought a sealed container in a blind auction for about a hundred dollars. Clearly he had been watching a bit of TV, because seventy nine per cent of our TV at the moment is devoted to shows about people buying lockers in blind auctions.

When he opened up his container, he was quite happy to find a car in it. A hundred dollar car. He was even more happy when he later discovered that it was worth a million dollars. And the best part of the story? He was the only person in the western world who had never seen a James Bond Movie.

Hell, no! That Bond asshole isn’t even ‘mercan!

And the coincidence? This nice man is called Radovan Krejcir.

He spends twenty per cent of the working day explaining to people how to spell his name.

He’s something of a local celebrity. He washed up on our sunny shores after fleeing the Czech Republic, where he was wanted for fraud and tax evasion. Don’t worry. He’s innocent. He told us so himself.

Since then, he’s spent a lot of his free time in court, not only fighting extradition, but also telling us that since he got here he has also been innocent of insurance fraud. And robbery. And murder. He is not a man of spotless reputation, in other words. He is, in fact, reputed to be rather intimately familiar with South Africa’s criminal underworld.

Don’t leap to conclusions. It’s cold, and he wants to go out and cut some flowers for his wife.

But how does this connect him to James Bond? Well, someone tried to kill him. Did they pop out from behind a bush and take a shot at him? They did not. Did they stab him in a deserted parking lot in the dead of night? No.

What they did was park a red Volkswagen Polo in the parking lot outside his offices in Johannesburg. And when he arrived in his own car, there was a bit of a bang. And no, it wasn’t just a car bomb. How dull would that be? We’re talking about James bond here! It was this.

What you are looking at is the back of the Volkswagen Polo. It burst into flames just after the bang. Do you see the round pipes where the number plate used to be? That’s a twelve-barrel home-made shotgun. It was triggered by a remote controlled device while Krejcir was out in the parking lot.

It didn’t get him. It got his car, though. Luckily, his car happened to be bullet-proof. You can’t take any chances when you’re as regularly innocent as he is.

I’ve heard that bullets sometimes fall from the sky after a tornado has passed through a munitions factory. Safety first, I always say!

Who does something like that? Not assassinate a professionally innocent man, but try to kill someone with a home-made, twelve-barrelled shotgun concealed behind the number plate of a stolen car? Did he somehow innocently fall foul of a bunch of particularly unpleasant eleven-year-olds? Is this really the calibre of our criminal underworld? Did his assassins have a meeting about this, where they rejected the idea of simply shooting the man in favour of stealing a car, ripping out its insides, building a twelve-barrelled shotgun into the back and then parking it in an empty parking-lot while they hid in a nearby bush with a small black box with a big red button on it, giggling to themselves and muttering “soon” while they waited around on the off chance that their blameless victim would appear?

What if he had been sick that day? Had they taken a few days off work, just in case? What would they have done if someone else had tried to steal the shotgun car?

James bond is just a movie character. Have you ever noticed how, at the beginning of each movie, Q supplies him with precisely the gizmos he will be needing later on? What if Q had given him a pen loaded with an expanding gas bullet when he really needed a laser watch?

And it also tells the time!

In the real world, assassins tend to use guns to try and get as much of their victims blood outside their bodies as they can before running away.

Who knows what’s really going on here. For myself, I wouldn’t be surprised to hear that this whole thing was staged. Criminal underground guys are criminal, not stupid. This all just seems like too much work to do to kill a man. No doubt we will be hearing more of the details in Krejcir’s next innocence affirming court case.

In the meantime, I’m off to go and buy a sealed container at auction. 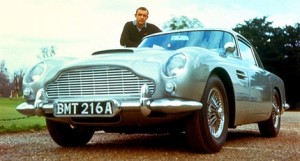 She will be mine!