This is something that almost everyone reading this has heard of.

No, that is not Yuletide crack.

If you live in a westernised country, you’ve been talking about it since you were small. You’ve sung songs about it. You’ve watched people carry it about in little boxes or in bottles on stage. And if you’re anything like me, you have never really bothered to find out what it was. Maybe this will help. 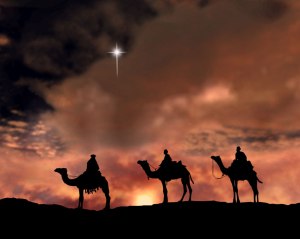 Yes, good people, that funny yellow dried snot looking stuff is myrrh. As in “gold, frankincense and myrrh.” It was of huge religious importance in biblical times. It was used by the Egyptians to embalm their dead and by other groups, including the Israelites, as incense in their temples. It was pretty hard to come by. So hard, in fact, that it could be mentioned in the same breath as gold as a nifty little present for a baby. And it was made by beating up a living creature and harvesting its blood.

Sort of. Myrrh is made by scarring a commiphora tree found in Arabia, and harvesting the resin that the tree exudes to protect itself. It formed one of the staples of a network of ancient trade routes which criss-crossed the Arabian Peninsula.  And it wasn’t alone.

The trade routes are still there, but now it’s all fake Armani handbags and black-market iPads.

If you know the bible in slightly more detail than just the nativity scene, you might have heard of “Balm of Gilead” as well. That’s also from a commiphora, and was (and is) known for its healing properties.

So why am I telling you about ancient Hebrew air freshener? I’m padding. I’m going to segue untidily into a post about some more Lowveld trees. Commiphoras. As far as I’m aware, you don’t find many commiphoras in other parts of the world, but Africa is rotten with them. The Lowveld has four.

They are odd little trees. They are, on paper, humble and unassuming little trees, but they are all instantly identifiable as commiphoras. Which is strange, because they don’t really look an awful lot like each other. Even more curiously, they are all, like Tiger Woods is to many, many women, easier to identify without their clothes on.

Who the hell is that?

What makes them identifiable is the shape of their trunks and branches. Leaves just get in the way, so commiphoras are easier to identify in winter, when they have shed them. They are short, stocky little trees, with trunks and branches fattened like succulents to store water in the hot, dry places where they tend to grow. But the coolest thing about them is their bark. Their bark is hugely varied between species, but is always distinctive. Here’s a selection.

Despite the economic importance of their Northern cousins, the commiphoras of the Lowveld are used for almost nothing. But they have other things going for them. Because they are immortal.

The Afrikaans name for the commiphoras is “Kanniedood”, which means, roughly, “Cannot die”. This is partly because they are almost impervious to drought, but mostly because, in order to grow one, all you need to do is snap a branch off an existing one and stick it in the ground. That’s all. No special treatment, no hormone powder, or protection from the sun, or watering, just stick it in the ground and you have a tree. This makes them pretty useful if you want to grow a living fence. They can even root and grow from branches that simply fall to the ground.

There’s a reason for this. Standing around being full of water in the middle of a drought tends to attract a bit of attention. From these.

Which must be a little disheartening. But instead of just dying, the commiphoras can simply send out roots from their fallen branches and pick up where they left off.

This was part of a full sized tree five days ago.

Here are the Lowveld ones;

Yes, it has two English names. Settle down, we’re just getting started. This is what the Zebra tree looks like; 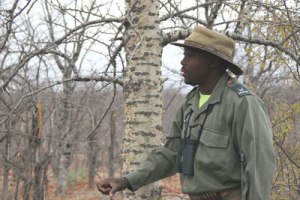 Stripes are a common form of natural camouflage. This man is completely unaware of the tree next to him.

No, that isn’t a birch tree that has lost its way. It’s not exactly stripy, either, but I will concede that “Zebra Tree” is rather more poetic than “Scabby White-Bark.

Still just the two names. And they’re pretty spot-on, too. The bark peels off in thin, papery sheets, and hangs down off the trunk and branches as if the tree had been toilet papered by naughty kids.

Although sometimes the name “Horrifying Eczema Corkwood would seem a little more apt.

I think a little ointment may be in order.

And that, good people, is how you name a tree! Don’t let anyone pin you down. You get the idea, though. It’s reddish. Bronzy. Some might even describe it as coppery. And papery in texture. It’s actually quite striking, in a reddish, bronzy, coppery, papery sort of way.

Had these people never heard the word “russet”.

And now they’re just messing with us. Lots of names is one thing, but mutually exclusive names is another. But it does actually all make sense. The tree is covered in loose, peeling flakes of papery white bark, which peel away to reveal a bluish green layer underneath. 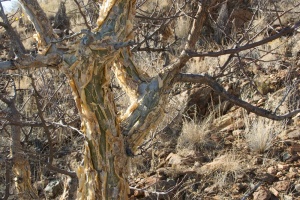 Well, that’s me for today. I would go on, but I’m off to beat up a commiphora. If I start drying its blood now I should have a brand new product to test the burgeoning nativity market with at Christmas time.