I think it is only fair to warn you that if, at any point in this post, you laugh, you are an evil person. Your heart is as hard and as black as coal, and you are destined for a fiery afterlife. I’ll see you there.

I’ve been reading a lovely old book about the mysteries of the ancient world.  It’s filled with pictures of jungle-hidden ruins and glaring stone statues. It has been filling me with regret. We don’t really know how to throw together a decent ceremony anymore. We don’t sacrifice virgins on top of huge stepped pyramids or dance naked in the firelight in massive stone circles. We’re a bit dull. 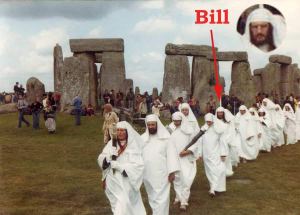 Except for Bill. Bill is at least trying. You go, Bill!

To be fair, we do try.  The Catholics tend to give it a bit of a go, and there is that whole Olympic opening ceremony thing, where every four years a different nation celebrates their tourist industry through the medium of interpretive dance and lasers. If you like your ceremony with a bit of a harder edge, there are the English royal weddings, where every couple of decades a beautiful young woman is sacrificed to the paparazzi while we watch on television, but it just doesn’t seem the same.

We do have one ceremony, though, which unites us all. We let birds go. 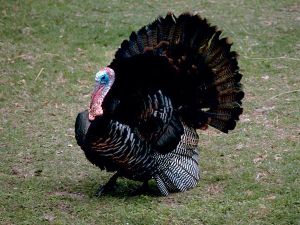 Not these ones. We keep these for another ceremony.

When I was younger, my parents used to travel abroad once or twice a year for work. We kids were sent off to stay at my cousins’ house, on a smallholding outside Pretoria. During one of these stays, as a special treat, my youngest sister was allowed to help my aunt to clean out their pet cockatiel’s cage. She must have been about six at the time.

My sister carried the cage outside with the all the gravitas one would expect from a small person who had been given a big person’s job. The soiled floor of the cage was removed, and the cage was gently deposited on the lawn so that Cheekyboy (for that was his name) could wander around on the grass while my aunt and sister scrubbed away the week’s dirt.

That, at least, was their plan. Cheekyboy had other plans. He made a break for it. No-one knows how he got out. But get out he did. And then he was off, rising slowly and awkwardly up into an unfamiliar sky on untrained wings as my aunt and little sister leapt to their feet and tried to catch him.

Dismay soon turned to horror as a passing falcon, on very well trained wings, dropped from the sky like a stone and snatched the unfortunate cockatiel from the air just above their outstretched hands. Cheekyboy was gone, leaving behind a cloud of slowly falling feathers and a single drop of blood that fell onto my sister’s arm. She was devastated. Nature has its hard edges, and I don’t believe that children should be sheltered from them, but that’s just not how little girls are supposed to learn that it is, indeed, red in tooth and claw. 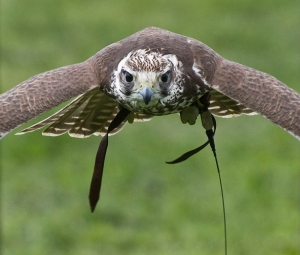 The red bits are coming soon.

I was reminded of the whole sad story this morning when I read that the Pope had repeated it.  He had invited two kids to join him as he said a prayer for peace in the Ukraine from the window of his palace in the Vatican. As a grand finale, the kids released two white doves, symbols of world peace. Should you believe in omens, what happened next does not bode well for the good people of the Ukraine. 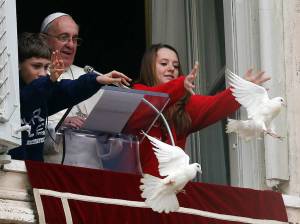 Nature opened up a can of whoop ass. One of the doves was immediately attacked by a seagull. Should you be feeling that this gives the Ukraine a 50/50 chance, don’t hold your breath; the other dove was set upon by a crow. Oops. 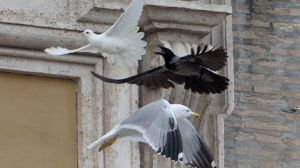 Luckily, the doves both managed to escape, and hope for the Ukraine was restored. So long as you don’t think too carefully about what happened to them afterwards; freedom didn’t seem to suit them very well.

Those doves are part of a rather curious modern phenomenon; the dove release. White doves have always been a symbol of the holy spirit for the Christians, but sometime in the middle of the last century the rest of the world decided to jump on the bandwagon and adopted them as a symbol of peace because Picasso said we must.

It’s all bit strange. Out here in Africa, animals are still involved in peoples’ cultural lives. Goats are sacrificed to the ancestors and dowries are paid with cattle, even in urban areas. But this whole dove story is from the West, where, apart from the Spanish and that whole bullfighting thing, most animals (apart from dogs and cats, which have been promoted to people status) have been eliminated from public life and locked away in petting zoos. But not the white doves. 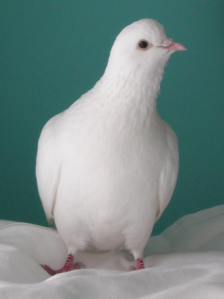 If it was up to me, we would have gone with bears.

These days, it is a rare thing indeed for any sort of large international ceremony to pass by without a cloud of white doves being scattered into the wind as a sign of how nice it would be if we could all stop killing each other. In order to keep up with their bigger cousins, smaller ceremonies are marked by the release of smaller numbers of doves.

To demonstrate that most people have absolutely no understanding of irony, couples are now releasing them at their weddings. Yup. To symbolise their eternal love, amorous young couples are comparing their relationships to global war by releasing small white birds from ornate little cages, presumably before signing a non-aggression pact and beating their swords into ploughshares.

All of this is not necessarily a good thing; allow this gentleman to demonstrate;

So much for global peace, then. Should you be thinking that this is an unfortunate and isolated incident, here are some Eastern European children doing the same thing;

Here’s a bunch of dignitaries at a peace day celebration in Afghanistan;

And just to round things off, here’s a bunch of international peace-symbols being barbecued at the Seoul Olympics;

I am ashamed to say that I find it hard not to laugh at some of these. Not because I am amused by the suffering of the birds, but because the outcome is so completely at odds with the intention. The crowds pause for a pregnant second as everyone takes a deep breath and waits for the climactic moment. Eyes start to cloud up with the beauty of it all. The world stops, filled with a sudden silence intended to frame that beautiful moment when two pure white wings rise up into the aching blue of the sky, allowing just a small part of us to soar on high along with them. Instead? Plop. It doesn’t help that the birds are generally released by the sort of puffed up local dignitaries who thrive on these occasions.

Things must be a little awkward afterwards, with much shuffling of feet and mumbling about how beautiful the ceremony was, while everyone tries desperately not to look at the tiny white body on the ground.

We are an odd species. We do odd things. This is one of them. How on Earth did we come to the point where important occasions should be marked by releasing clouds of maladapted and occasionally dead birds. We don’t release snakes at medical conferences (although I think we should), despite the fact that the snake is the symbol of medicine. The AGM of Mensa is not opened by releasing a squadron of owls.

Relax! We’ll fly away soon. We’re just waiting for it to get dark.

Odd it may be, but there’s also a very real problem with this whole bird releasing phenomenon. Picture this scene; it’s the opening ceremony of the 2034 Winter Olympics. In Alaska. The song-and dance session is over. The athletes have finished their march around the arena. And now it’s time for the climax. The big finish. In a beautiful and moving tribute to world peace, thousands of pugs are simultaneously released into the frozen wilds.

It makes perfect sense. Pugs are descended from wolves. They are wolves. And wolves live wild and free in Alaska. As will these pugs.

There’s just one little thing to remember. Pugs can’t breathe properly, and are about as athletic as elephant seals on land. They won’t make it through the night. 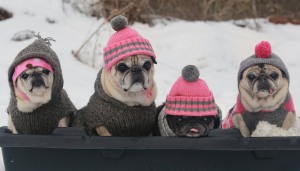 FREEDOM ROCKS! Can we come back inside now?

And that is precisely the problem with the white doves.

Doves aren’t supposed to be white. There are other birds that are, but doves have not evolved to stand out from their environment like that. It makes them targets. And their colour isn’t the only issue. They are raised in cages and fed by people. Their flight muscles don’t get the chance to develop, and even if they did, these birds don’t know how to find their own food. And they don’t know how to deal with predators, either. To release a cloud of white doves into the wild is to send them off to their doom.

But fear not! We have come up with a rather cunning partial solution to the problem. Only the most unscrupulous of white-dove-releasers release white doves. Those are mostly kept in pockets and hats by magicians. We release white homing pigeons instead. 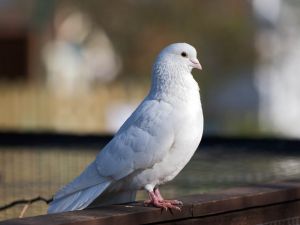 Even though they look marginally less peaceful.

They, at least, have a decent chance of getting home rather than starving.

So there you have it. Our ceremony. As ordinary as we may think we are, at the beginning of the 21st century, we are doing something extraordinary. We have taken to marking important occasions by pretending that we are releasing clouds of peace symbols to their freedom, when in fact we are driving a bunch of funny-coloured pigeons around in cages, making them sit through hours of speeches, and then opening the doors and sending them home. Unless the pigeons are dead, in which case we are throwing them onto the floor with as much drama as we can muster while the assembled crowds pretend not to notice.

The Incas and the Druids must be watching from beyond the grave with something very close to envy. 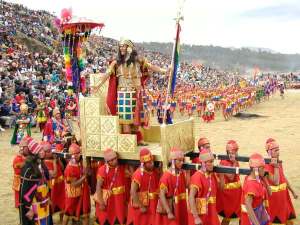 What do you mean we don’t have any white doves? Pigeons? No? And you call this a ceremony?