Hi. Apologies. I just stepped out for a while. I’m popping back in to finish up some stuff.

And so. On to a solitary nocturnal land animal that cannot swim; the hippo. 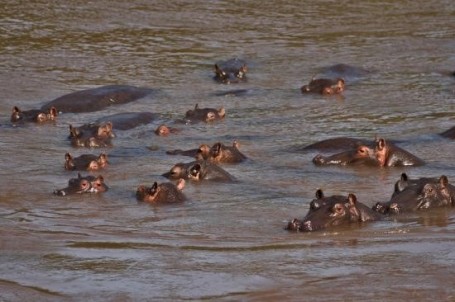 Back in the day, when things were simpler, we decided that the hippo’s closest relatives were the pigs. Which sort of made sense if you looked at them. But nature doesn’t need to make sense, so once we got down to the level of DNA, we found that the hippo’s closest relatives were in fact whales and dolphins, and if you think that makes sense, the only thing you are thinking about is water. Picture a hippo, a blue whale, and a large white (the pig, not Hafthor Bjornsson), and you’ll see how bizarre this really is. 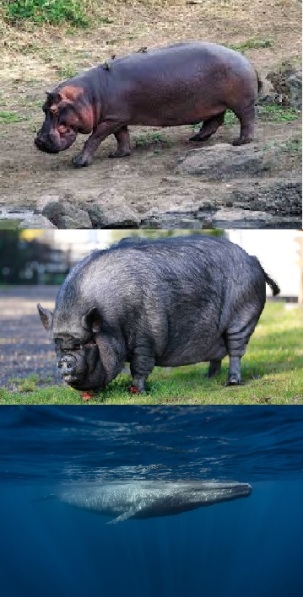 One of these things is not like the others..

It just goes to show quite how unlikely this whole evolution thing is. A billion years ago, life crawled up out of the water, took a look around, and decided to stay. 50 million years ago, after all the effort involved in evolving legs and lungs and hair and so on, a bunch of mammals took another look around and decided “Bugger this! We’re going back.”

They started off their slow steady return by hanging out in lakes, rivers and lagoons, and some of them, it seems, are still there. In the Lowveld. Where the word “river” is most often prefaced by the word “non-perennial”, and the fish are evolving lungs and learning to walk on land. Nature is fun.

Hippos eat grass. Grass does not grow under water, and is actually fairly hard to find in hippo quantities anywhere close to water, since that is where all the grass-eating animals tend to gather to drink. This means that every evening, at around sunset, hippos emerge from the rivers and pools where we are used to seeing them and wander off, alone or with their calves, to find some grass to eat. When times are tough this can involve a nightly round trip of over 30 km.

The hippos we are used to seeing are “resting”. I put resting in inverted commas because hippos, as a species, have made some questionable life choices. Water is a scarce commodity in the bush. Hippos are crushed in uncomfortably high numbers at uncomfortably close quarters by their need for it.

To top things off, they then live through an annual climate cycle which sees their living quarters shrink as the dry season grinds on, at just the same time of year that the grass they need is getting harder to come by. They live rather stressful lives. Their response? Violence. Don’t let the smiles fool you. Hippos are nasty pieces of work. 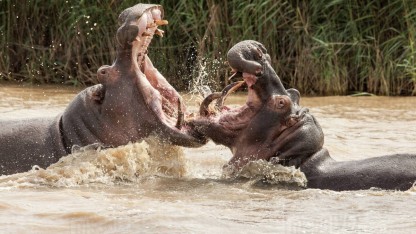 I have been lucky enough to go on a few walking trails out in the bush, and the behaviour of the rangers and game guides can be somewhat surprising, especially in dangerous situations. Or rather situations I thought were dangerous.

I’ve had them walk me so close to rhinos I felt like I could spit on them. I’ve stumbled across a herd of elephants in thick riverine bush and watched them put down their guns to pick up sticks to throw at them (and yes, we were close enough to throw sticks at them). We’ve spotted a lion on a kill about 50 metres away and walked towards it, not away from it.

They seem fearless, and sometimes even foolhardy, but they’re not. They just know where the limits are. And the limits for hippos are apparently very far away indeed.

I have been on walking trails twice when we have stumbled across hippos away from the water. Both times, we have turned around and walked away. Fast. No pause for a couple of quick photos or a brief chat about their place in the ecosystem. Just a good old fashioned hasty retreat.

Hippos, you see, are very dangerous indeed. Lions kill about 250 people a year. Hippos kill over 500. They’re our most dangerous big animal. And they are very big indeed, fourth only to elephants and white rhinos.

They will attack boats that approach too close, but they are at their most dangerous when they’re out of the water. And their jaws are big enough to bite us in half. Which they do. Regularly.

But violence isn’t just their response to us. It’s their response to each other, too. Hippos are some of the few animals that regularly fight to the death. Most animals will content themselves with a flashy display or a bit of sparring to see who is strongest. Hippos will often straight up kill each other.

But it’s not a free-for-all. There is a system in place. One that is held together by hippos yawning and pooing at each other. Dominant bulls hold a territory, which they advertise by yawning to show the size of their jaws and spraying dung around by rapidly beating their tails.

They reaffirm their borders with neighbouring bulls by walking up to each other, locking eyes, and then turning around and spraying dung and urine at each other. For those of you concerned with hygiene, try not to remember that they are doing this in the water. Where they live. 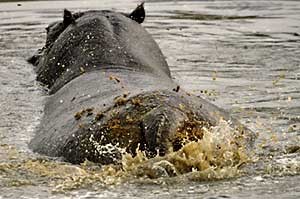 I wonder where they’re getting their fresh drinking water.

Territorial bulls will tolerate subordinate bulls and females in their territories, so long as they signal their status by spraying urine at them submissively. The real action happens when another bull challenges for access to the females. Then it’s on. They fight jaw to jaw, but the real danger comes in when the loser tries to break away. The skin on the neck and shoulders is incredibly thick. The skin on the sides not so much. And hippos didn’t evolve those teeth for eating grass.

That’s not it with the violence. Hippos will kill calves, particularly in the dry season when their pools and rivers start to shrink. In response, females will mob males who try to enter nursery herds.

Hippos don’t reserve all their violence for each other and us. They have been known to kill and try to eat other animals. Interestingly, they have also been observed trying to rescue and care for injured animals.

What all this means is that hippos are seldom boring. If you find a pod of them while visiting the bush, turn off your car and watch them for a while. There always seems to be something going on. And listen, too. The bellowing of a pod of hippos is every bit as iconic a sound of the wild as a lion’s roar or a hyena’s whoop.

That’s just about it for hippos. Just a few little facts left.

Hippos aren’t scared of crocodiles. They can bite them in half.

For animals that have chosen to make their homes on the world’s hottest continent, hippos have ridiculously silly skin. It is prone to sunburn, and is also stupidly porous, leaving the hippo prone to dehydration.

To put up at least a token defence, hippos secrete a red substance that acts as a sunscreen and also has anti-bacterial qualities, which is no doubt handy when your two main hobbies are biting each other and pooing at each other in the water you live in.

Hippos can’t jump. At all. This may seem trite until you remember that this is Africa’s most dangerous big animal, and can probably run faster than you (they can steam along at 30 km/h). Don’t try and beat one on the flat. Just step over something knee high.

Oh. I nearly forgot. They really can’t swim. Despite appearances, hippos are heavily muscled and have very dense bones. They sink like stones, and move through the water by walking or running along the bottom like astronauts on the moon. You won’t find hippos out in deep water on a lake. Don’t dive in, though. Crocodiles can swim.

15 thoughts on “The water horse”