As promised, I am putting up a couple of posts that I had written for a putative blog for the bookshop I manage. I have written a few, but haven’t been able to go live with my blog yet. I need to hammer out some sort of deal with my head office. They have just moved into a shiny new office, with shiny new furniture and shiny new computers. What they do not have, despite promises to the contrary by various government departments, are shiny new telephone lines and shiny new internet connections. They’re a little distracted right now. This is not hammer time. 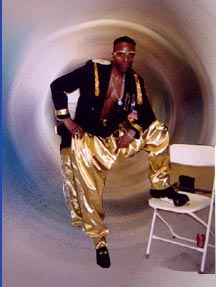 Which is a pity, since hammer time is probably my favourite time.

I am hoping to recruit a few more bookclubs for my store. And I suspect I’m going to run into a little trouble from all of you.

I remember hearing, years ago, that the South African bookclub is a unique thing. Our thing. The story went that isolated farming communities were getting together to pool their resources to get hold of books, which they then shared among themselves, like a members-only library. Somewhere along the line, people realised that the social aspect of these clubs was as fun as the literary one, and when the isolated farmers started to move to town, they took their bookclubs with them.

And there’s more to the story, too. Bookclubs were, back in the day, a white thing. But they were one of the few crossovers, in the days of “whites only” park benches and policemen in body-armour patrolling local shopping centres and plastic relief posters of terrorist bombs on post office walls, between white and black culture.

Black people, back in the day, were largely denied access to formal financial structures like banking and insurance. So they created their own structures, and one of these was the “stokvel”. It’s a curious sort of name, because it’s Afrikaans, and means “stick skin”. And no, I don’t know why. 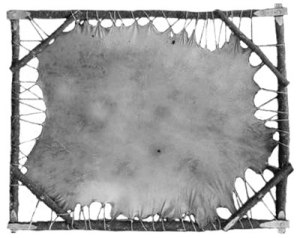 This does not clear anything up.

A stokvel works like this; a group of friends or neighbours gets together for some specific purpose. It could be for weddings, or funerals, or parties, or pretty much anything that requires the occasional injection of cash.

Each member makes a monthly contribution, which is held in trust. When the need arises, the money goes to the member who needs it, or to the group as a whole (this works pretty damn well with parties). It is, in effect, an old school insurance policy, without the bank charges and taxes and formal legal requirements. And it lives on. For now. I was a little crushed to hear a formal banker type on the radio the other day announcing that she thought stokvels were a very good idea and the formal sector felt it was high time they got involved. To help. Not to take their share of all that lovely money, I’m sure. But I digress.

A bookclub is essentially a stokvel; a bunch of private individuals pooling their resources for their mutual benefit. Books. I can think of no better way to manage a cultural crossover.

And now you get to burst my bubble and tell me that there are bookclubs all over the world, and they have nothing to do with stokvels. You can go first, Australia… 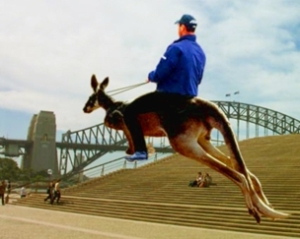 A typical Australian sets of for his bookclub meeting.

Anyway, here’s my putative bookclub post. Mzansi is South Africa. I’ve blanked out some of the names, because that’s how I roll (few of you might have realised that my name isn’t really 23thorns…).

“I come from a large, loud, boisterous gang of a family. We are close. Growing up, we moved as a pack; whatever we did, we did as a group. We socialised as a family. Any friends our parents had were family friends. We travelled as a family, stayed at home as a family, went out to dinner as a family. My mother was (and is) a homemaker, and spent most of her life running around behind four busy children. And then there were “the girls”. 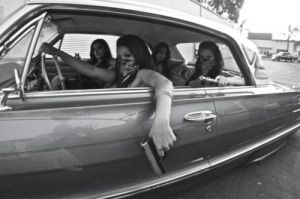 Once a month, on the last Thursday of every month, my mother would set aside the school lunches and the birthday parties and the extra lessons and the soccer matches and the family braais, and head off to spend a morning with “the girls”. She still does.

It was, as far as I ever knew, the only thing she ever did which was hers and hers alone. I never really knew who “the girls” were. They were not my mother’s friends in the way we understood the concept. They didn’t know my father well enough to call him his nickname like all the other grownups around us did. We children were not required to prefix their names with “Aunt”. They never popped in for a visit on the weekend or dropped in for a cup of coffee after the school run. I have met one or two of them over the years, incidentally at shopping centres or restaurants, but I could not name a single one of them now.

“The girls” are my mother’s bookclub. My mother is in her seventies now, and “the girls” have been together for longer than I have been alive; more than four decades (which should call into question their definition of themselves as “girls”, but who am I to question the wisdom of my elders?). There have, no doubt, been changes over the years, as people have moved away and new people have moved in, but the core has remained the same. Yup. “The girls” have shown more commitment to their bookclub than most people show to their marriages.

They might be getting on a bit, but they’re still a pretty rough crowd.

What they are doing, if my understanding is correct, is uniquely South African.

Sure, other countries have things called bookclubs. We would call them reading circles. They work like this; all the members of the club go out and buy a book. The same book. They read it. Then they get together and talk about it. Which is, I’m sure, very nice, if you’re into that sort of thing, but sounds just a little bit like work to me. School work.

There are even clubs that go one better. They are correctly referred to as book reading clubs. They sound magnificent. A group of people get together once a month, and one of their number reads a book to them. Aloud. I would pay good money to be a fly on the wall at one of their meetings. I have so many questions. Does the reader do different voices when the characters are speaking? Are there sound effects? Are the listeners allowed to make eye-contact with the reader? Do you get kicked out if you shoot coffee out of your nose during a pivotal sex-scene? 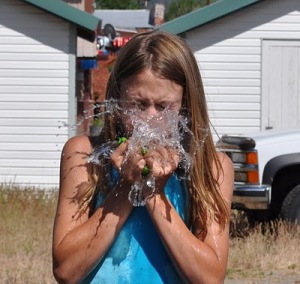 And in South Africa? Things work a little differently. ‘Round here, your bookclub gets together to buy the books. And you get to read them by yourself. This is how it works; 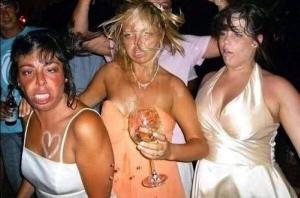 We won’t judge you, I promise…

So that’s it. That’s how to bookclub, Mzansi style. It’s all rather straightforward.

It is not, however, ironclad. If you live out of town, or happen to know exactly what you want, you can simply buy the books before the meeting. As long as you have registered, and spend above the threshold limit, you will still get your discount. But you’ll be missing out on a damn fine argument. Just saying. 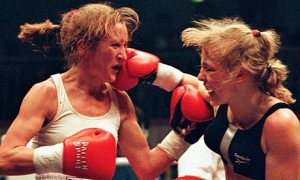 You can, should you feel that way inclined, buy a copy of the same book for each member of the club, read it beforehand, and then discuss it at the meeting. We will be impressed, and ever so slightly intimidated.

You can even buy just a single book, and read it out loud at your next bookclub meeting. You are unlikely to qualify for the official discount, but if you promise to invite us along to your meeting, I’m sure we can make a plan. If you use different voices for different characters, throw in the odd sound effect, and cover a pivotal sex-scene, you might even get to see us shoot coffee out of our noses.

So here goes. We live in a city. So many of us have been thrown together in so little space that we have become isolated. We are friends to our friends, family to our family, and avoid everyone else. We don’t get together for village fairs or barn raisings or cake-sales at the town hall. Half of us don’t even know our neighbours. It’s bad for us. We need to get out more. And if we do so in honour of books, so much the better. 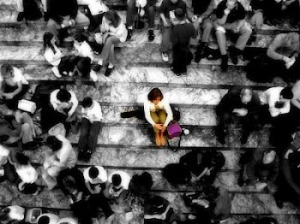 Some people choose to be isolated. This woman, however, clearly has cooties.

But that’s not all! We are by no means a selfless society, and yet we have somehow forgotten to do things for ourselves. Not selfish things, just our own things. We live for our jobs or our children or our partners. We spend our free time doing team-building exercises with colleagues, or watching our children play sport, or hanging around with people who aren’t blood kin, but whom our children refer to as “Aunt So-and-so” or “Uncle Whatsit”

But wait! There’s more! (Sorry. I watched a lot of infomercials in the eighties). One day we’re all going to be in our seventies. What a rare thing it would be to look back and to remember that you popped out one evening all those years ago to check out what this whole “bookclub” thing was all about. To remember feeling a little nervous, a little shy, and a little excited about trying a new thing with new people. And to remember that it turned out to be good enough to stick with for forty years, through arrivals and departures and births and deaths and marriages and divorces. And then to stop looking back and instead start looking forward, because you would be doing it again next Thursday. 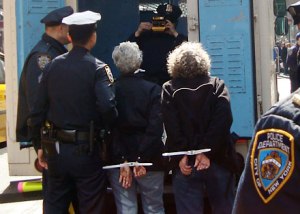 Just remember to take along some bail money.