Once upon a time, a long, long time ago, I got my first proper job. On the first day, I arrived early. As one does. Three hours early. I don’t like to take chances. At least not on the first day. After that it all goes to hell. Finding everything completely closed, I sat myself down on the ground and settled in for a wait. 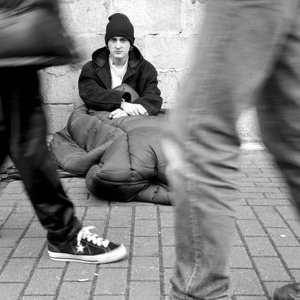 I always like to make a good first impression.

I didn’t have too long to wait. Soon, a young woman arrived. She was wearing long, flowing black clothes, white leather gloves, and a pair of those cat-eye glasses from the fifties. She looked me up and down and strolled over.

“Hello,” she said, stretching out a hand “you must be the new guy. I’m doing Dorothy today.”

I was in no position to argue. I smiled and shook her hand, making a mental note not to turn my back on her at any point, or make any sudden moves. Only later did the penny drop. Dorothy Parker! She was dressed as Dorothy Parker! Oh! A lunatic! I was going to be working with a crazy person!

Who says work is boring?

Luckily, I quite like crazy people, so I married her. And nothing has changed. She still dresses like that. Not like Dorothy Parker. But according to a theme. I will wake up in the morning and pry open an eye to find her standing in front of the mirror in green leggings and a button-up shirt with a belt round it. “Robin Hood.” She will say. And I will back slowly out of the room to go and get some coffee.

I will emerge from the bathroom to find her dressed in a cocktail dress at seven o’clock in the morning on a Tuesday, with a beaded headdress on. “The Great Gatsby.” She will say. And I will try to ensure my movements are fluid and unthreatening.

This is how we take out the rubbish.

This is how we take a stroll along the beach.

To be fair, I was wearing my formal black speedo.

Thank god it was Blondie and not Cindy Lauper!

She is still, as you can see, completely round the bend. I should, I suppose, alert the authorities. But I like her like that and besides, what happens if she’s doing “Rosie the Riveter” on the day they come to take her away. There will be blood, and I suck at cleaning.

You can also use the “Buy me a beer” button on this site to buy tickets to the gun show.

This has all rubbed off on me over the years. I, too, dress to a theme. The same theme every day. That theme is “Never forget to wear pants when taking the kids to school. Again.” I look like this. 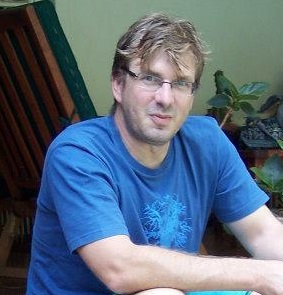 I’m wearing pants in this shot. I swear it.

Unless, of course, we’re going to some sort of formal do, in which case I will wear a collared, button-up shirt.

A tie, however, would be a bridge too far.

Why am I telling you all this? The youngest 23thorns has come of age. Let’s call her V. No longer is V the sweet, pliable little cherub who would look up at me with limpid blue eyes and say “Thank you, Daddy!” when I picked out an outfit for her. No longer does V give me a sympathetic smile as Mrs 23thorns, channelling a 17th century pirate, returns the outfit to the cupboard with the rather curt explanation that blue, orange, purple and yellow somehow “don’t match”.

She has, you see, decided she is big enough to dress herself. This wouldn’t be a problem if she took after me. But no. No she does not. She, too, dresses to a theme. She, too, has  the same theme every day. Every day is Helena Bonham Carter day.

People throw at least $100 at her in change every day.

In order to get dressed every day, Helena Bonham Carter apparently chooses three different outfits and then puts them all on. That’s how V rolls, too. She has, you see, got four older cousins. Girl cousins. Cousins who hand down their clothes. V is four, and has over a hundred pairs of shoes. I’m not exaggerating. I have proof;

We wake up at 2am every day so that we have time to pick out a pair.

If that’s what’s covering the bottom layer, you can imagine what the rest of the cupboard looks like. So this happens.

She is hospitalised with heat-stroke at least twice a week.

Yes, that is indeed a small person wearing leopard print gumboots, purple corduroy trousers, a white dress, a floral skirt, a blue jersey, and, on top of that, a pink vest. No, she is not playing dress-up. That is how she is going to go to school. Yes, we should probably step in at some point. No, we are not going to. People lose fingers doing that.

Instead, we have told ourselves that she is finding her identity. Building character. The same way Dr Frankenstein builds friends.

This is how we go shopping.

We keep hoping that the teachers will be too busy with all the other kids to notice that Helena Bonham Carter has snuck into their lives. But we’ve been rumbled. The other day I was blearily ploughing through my second cup of coffee when a cheerful little soul appeared in front of me, chest puffed out with pride, and what looked like three different jerseys. “I,” she announced, with gravitas beyond her years, “have a cat-hat!”

“Oh.” I said. I’ve learned not to let myself be drawn into conversations that start like this. “Good”.

Later, I found out that she did, indeed, have a cat-hat. She had snuck it into her school bag. The teacher sent home this;

It just so happens that I like the way Helena Bonham Carter dresses. She lives in constant danger of becoming a parody of herself, but somehow she manages to pull it off. It’s all about attitude.

Attitude and a steady supply of powerful hallucinogens.

V is going to have to develop the same sort of attitude if this is going to carry on. I’m not too concerned. Yesterday, on the way home from school, she stuck her head out of the car window as we drove past a crowd of people on the side of the road. “I”, she shouted at the top of her lungs, cat-hat flapping in the wind like a deboned airborne pink turtle, “AM V, BUGGERS!” She is indeed, and I think she’ll be OK.

Someone has to keep their feet on the ground round here. Luckily, there’s me and the boy. Normal people. People with a quiet, conservative sense of decorum who understand that your clothes are there primarily to avoid public nudity. Or maybe not. He came with me to the shops the other day; 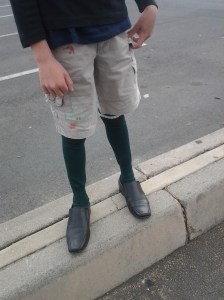 Someone has to keep their feet on the ground round here. Luckily, there’s me. I could go on, but I have to go now. Mrs 23thorns is doing “The Fifties” today, and she wants me to take a picture of her taking out the rubbish bin. Bye.