The Lowveld is not exactly a wet place. It is, in fact, rather dry. It is criss-crossed by a network of dry, sandy riverbeds that flow maybe four or five times a year, after heavy rain, to be swallowed up by the sand again after a few days in the driving heat of the sun.

Come on in, the water’s lovely!

But there is water there. There are a few permanent rivers, lifelines during the rainless winter, and sometimes a few pools will remain in those dry riverbeds, in protected spots beneath cliffs or in troughs carved out of rock where the sand has been scoured out by the driving force of the river when it is in flood. There are artificial water points, too; dams built across rivers to trap the water before it retreats under the sand and waterholes filled with borehole water.

If you stop at one of these spots, there is a very good chance you will see a rather strange looking bird there, wading slowly through the shallows or stirring up the water with one of its feet, or simply standing and staring down  into the muddy depths. It’s called a Hamerkop. 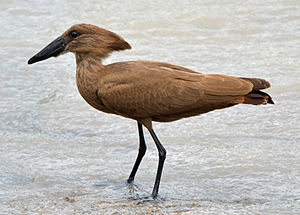 It was named before ice-picks were invented

And it doesn’t just look rather strange. It is strange. It is very strange indeed. Yes, good people, I have recovered enough from the onslaught of owls to do a Lowveld post about birds again. Or rather about a bird. Just the one.

The Hamerkop just happens to be a perfect candidate for this. Because it doesn’t seem to belong with anything else. I don’t mean that it doesn’t really look like anything else; I mean that taxonomists don’t really know where it belongs. Some of them have it down as a cousin of the pelicans, while others say it’s a cousin of the herons and the storks. It is placed in a family and genus all of its own.

We can start with the way it looks. Hamerkop means “hammer head”. God knows why they called it that. It has slightly webbed feet, although it does not swim, and one of its toes has evolved into a comb that it uses for preening. A hairstyle like that doesn’t just happen. In flight it manages to look rather sinister.

The Japanese, too, have evolved a comblike toenail as a grooming aid, but this is a case of convergent evolution, and not an indication that they are related.

But when it comes to being a proper weirdo, looks can only take you so far. Your behaviour has to be a little bit “off”, too. And the Hamerkop has got that covered. We can start with its diet. It eats quite a few water creatures, and a few insects, but mostly it eats frogs and toads. And it has a favourite, which is suitably weird in itself; the Platanna, a completely aquatic toad with poisonous claws that used to be used in pregnancy tests.

Then there’s its social life. It forms pairs to build its nests and raise its young, but it doesn’t stop there. The Hamerkop like to party. It gets together in groups of about ten and runs around in circles, flapping its wings and making a racket. Nobody knows why. It also mounts other Hamerkops occasionally, but not to mate. It just seems to feel the need to land on top of one of its neighbours every now and then. 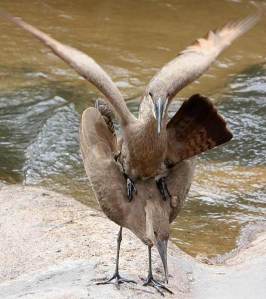 Hi George. How are the wife and kids?

This is all well and good, and some of it is quite unusual, but it doesn’t really qualify the Hamerkop for weirdo status, does it? This does.

No, it’s not an ostrich nest. Those have little ladders next to them.

This is what makes the Hamerkop a weirdo. It’s a Hamerkop nest. And it is spectacular. It’s immense. It’s the biggest non-communal nest in the world. It can weigh over 50 kg and is big enough and strong enough for a man to stand on. It has a mud-lined chamber in the middle that is well insulated enough for the Hamerkop to leave its young for fairly long periods.

You would imagine that a nest like that takes years to build, the Hamerkops returning every year and adding more sticks. It doesn’t. They do return every year if they can, but Hamerkops build their nest that big in one season. They are often driven out of their nests by owls. No biggie. They don’t even put up a fight. They just build another one. The same size. They can build up to four in a year.

It seems like an awful lot of effort to go to to raise your young. But remember we are dealing with a weirdo. Hamerkops build nests like that even when they aren’t breeding. They just really like to build nests. And they aren’t just into construction. They like to do a little decorating, too. They attach bits of cloth or plastic to the outside of their nests to give them a sophisticated “shabby chic” look. 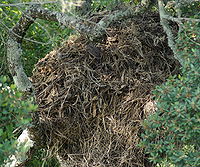 As if it wasn’t beautiful enough on its own!

You don’t go around putting things like that up in trees without attracting a little interest. Hamerkops are viewed with superstitious dread by a number of local cultures. They are, first and foremost, harbingers of doom. If a Hamerkop flies up from your home and calls three times, someone is going to die. How do the Hamerkops know this? When they stare fixedly down into the water like that, they are said to be seeing visions of the future.

But that is mere child’s play. There are worse fates than death. If you ever get your hair cut in Hamerkop country, be sure to pick up all the pieces. If a Hamerkop picks up a tuft of your hair and uses it to decorate its nest, you’re going to go bald. 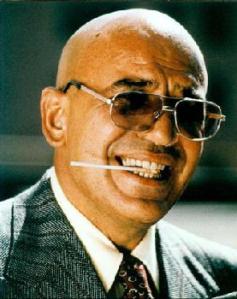 I got my best haircut ever in Africa. It was also my last.

With birds like this, you can’t take any chances. If one is spotted over a village, the inhabitants will sing it a song telling it how clever and good looking it is, and asking it if it would please be kind enough to go away without hurting anyone.

Right. That’s it for now. I would love to go on, but I saw a Hamerkop flying over the garden this afternoon, so I’ve invited some friends around to spread the risk a little, and now I need to write a little ditty about how wonderful the Hamerkop is with children and how shapely its ankles are. I’m not really in to all that superstition stuff, but it doesn’t do any harm to be careful, does it? 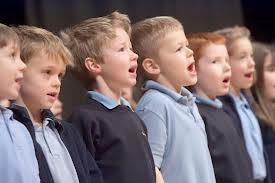 Your wings are strong,
you smell quite nice
I like your feet,
So please don’t take my daaadiiees hair.